Technology and the Trump Presidency will make Americans Great Again

Each day since the presidential election in 2016 I have mourned. Since the inauguration, everyday I feel like I am a stranger in a strange land.

I learned early on to stop saying ‘it can’t get any worse.’ (Hang in there, this post gets better.) Every human right I have worked towards advancing in my 30 years of practice seemed to be crumbling. My furious social worker self calls, writes, tweets, gives money, protests, develops action plans, and supports individuals experiencing the many injustices occurring. This advocacy behavior is not new to me, but the frequency has increased tenfold. I experienced a despondency and burn out my optimism of the past would not allow. I felt hopeless.

Then something changed. As I reflect back, this momentum started with the #blacklivesmatter movement and then continued with the #metoo revelations which in turn hit critical mass from the last school shooting in #Parkland. I began to see America through a strengths based perspective again, and I do mean strength.

The Start
Even before the Trump Presidency, the #Blacklivesmatter movement began to shift how advocacy became a nationwide phenomena of awareness and support. Technology began to be used to address inequity and racism. The social media storm after the Trayvon Martin murder elevated awareness of injustice through a hashtag. Instead of the injustice only being addressed by the community where it happened, social media’s vast reach elevated The Black Lives Matter movement. I believe this movement gave an unconscious permission for people of color to then bravely start documenting the injustice of abuse towards the Black community and share their perspective with the world, not just their community.

As institutional racism promotes the keeping of secrets in misconduct by power structures, social media allowed a breakthrough of voiced experience to occur. Hearing about a racist act is significantly different then SEEING it. Smart phones and surveillance video became a tool to tape the violent misdeeds of those abusing power. The instances of abuse towards minorities by people in power is not new. The potential of a smart phone, capable of instant recordings and real time video exposure, broke open these offences towards people of color. White people, comfortable in their privileged denial of criminal justice inequity, could not deny what their eyes saw. A new layer of awareness spread across America for some of those privileged open to the truth, but more intersections of diversity needed awakening.
Then Came Trump…An Advocacy Culture Gains Momentum
As the election results became finalized, Women across the country knew we were in trouble. Evident from the positions taken by Donald Trump on legislation and policies attacking the rights of women, immigrants, LGBTQ, and ACA recipients, coupled with attacks on reproductive rights, climate change, racial equality, and freedom of religion, a movement engaging more complacent Americans than ever was born. I did not feel alone in my struggle with the change of power any longer.
The following personal example started my kernel of hope for change. I do love a good protest, most social justice warriors do. Starting in college I participated in protesting for many causes impacting vulnerable and marginalized populations. Friends and family would roll their eyes with my accounts of demonstration tactics to affect change. Fast forward to today. My mother, MY 74 year old MOTHER, attended the Women’s March in Chicago. She even regularly participates in the Facebook group Pantsuit Nation and watches Rachel Maddow. Not only did she attend, but millions of women (and men) protested around the world for a woman’s right to be equal. If my mother began action to change the state of America, there is hope for us all. 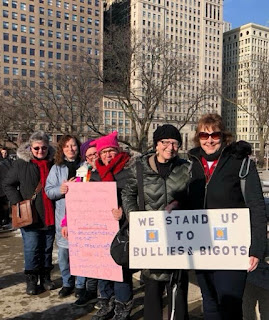 (my mother, Karen H. far left)
And then came #metoo

The #metoo movement offered the chance for the invisible to become visible. A solidarity among women rose like never before. #metoo not only offered an opportunity for global healing, but an increase of awareness as never felt before by all citizens. As the #metoo hastag became a tsunami of posts from women of all colors, status, income and age, a profound awareness spread as each woman (and some men) bravely came forward to be silent no more. Harassment and assault became the face of a celebrity, neighbor, friend, or relative, not just a CSI-SVU episode. The next level of civic engagement enveloped an even larger segment of the population.
Women across the World are protesting for equal treatment and equal rights. Even with the importance of the #metoo hashtag, out of this awareness the after effect is what holds the most promise. Abusers are losing jobs and status. Companies feel pressure to hold an ethical line not previously addressed. Citizens demand consequences or they will garner their own efforts, through social media and their buying power, to hold accountability to large company deniers and abuse backers. Money is being raised and allocated to support the plight of women without means to herald their own power over harassment and abuse. Protests and social media campaigns are now becoming the start of a larger discourse changing societal norms.
The hope continues…through Tragedy
The cumulative effect of these efforts will reverberate across America for decades to come, yet these movements paved the way towards what we are seeing now with the #Parkland school shooting. If I became encouraged about my mother’s demographic becoming involved in societal change, seeing Generation Z start a movement is awe inspiring. The “First they came for” adage applied before this shooting. People of privilege (insert name of privilege here) did not take action because it wasn’t happening to them. Sure, some people felt bad or hopeless about mass shootings or gave money to help those personally impacted, but what did they ‘do’ about it?

The youth impacted by the #Parklandshooting are not waiting to make a difference, they ARE making a difference. Parkland Florida is one of the wealthiest cities in Florida and yet even with all this wealth the deadliest high school shooting in America occurred. The reasons are complicated and important, but the main takeaway from this which offers hope is what happened after the shooting.
Our youngest generation is developing their political voice using social media and protest to promote their discontent with the systems inaction. Political pressure is being focused across society on a movement to protect youth. The #MarchforOurLives movement is encompassing not only mass shootings at schools, but the societal harm of lax gun laws in America impacting every intersection of population. Pressure is being placed upon policy makers and Corporations to not just donate towards a cause, but change their policies if they want to prosper.
Days after the shooting, some students met with teens from Chicago to talk about gun violence. The Parkland teens message became even more inclusive during a crucial understanding of difference between their experiences. Instead of Parkland teens helping Chicago teens, Parkland teens opened up to a new awareness. “A critical moment came when one of the Parkland students apologized for the privilege they took for granted.” And this is the start of the larger narrative needed to bring communities together in America.
Parkland students are using their considerable privilege and their technology literacy afforded to them from this privilege to give voice in attempting to eliminate the epidemic of privileged behavior supporting gun proliferation and it’s cultural consequence in America. The blueprint for action these students built upon from other movements will gain momentum towards other morally bankrupt political structures harming Americans. Americans continue to be awoken. The sleeper awakens.
The discourse across America has begun to make a difference. American’s have the power to make America great again…in spite of our political system. This is the hope delivered from the Trump presidency.

Technology and the Trump Presidency will make Americans Great Again was originally published @ Bridging the Digital Divide in Social Work Practice and has been syndicated with permission.