Trump requires an admiring mirror. The politics of malignant narcissism.

The object relationship framing this affect expresses concretely the desire to destroy or dominate the object. An almost unavoidable consequence of hatred is its justification as revenge against the frustrating object; the wish for revenge is typical of hatred. Paranoid fears of retaliation also are usually unavoidable accompaniments of intense hatred, so that paranoid features, a wish for revenge, and sadism go hand in hand. Otto Kernberg 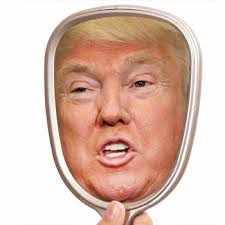 Last Saturday, Trump ended his “Thank You Tour” in Mobile, Alabama. His intent was to entertain his base and bask in their reflection. Since he’s good at this, we can expect a lot more to follow. He needs to play his strengths. Get ready for a permanent campaign where he avoids the informed press, dodges critical negotiation, and ignores the disgust he evokes. He will constantly rally but not govern. Akin to an angry, hungry infant, he doesn’t care what he doesn’t know and his thin-skinned defensiveness will keep this ignorance unchallenged. And it’s much worse than that. Infants mature. At this late date in his game, Trump apparently can’t afford to acknowledge his glaring intellectual and emotional weakness and incompetence.

Demagogues and fascists require an admiring mob, and Trump thrives in co-dependence with an undereducated, aggrieved crowd who will never call him out. They reflect well on each other but it’s a devil’s bargain: this mob needs their feed. Watch him fan their impotent rage and wink and nod at nativism and white supremacy. Where there aren’t enough Muslims to attack, anti-Semitism will do. He’ll continue to employ misogyny and hate to distract from his nepotism and theft. He plans to make out like a bandit. He brags there are no laws to stop him.

He’ll reject ethics and embrace kindred demagogues, foreign and domestic, who support his malignant narcissism and greed. Those who resist collusion can expect revenge. Watch our president-elect’s handlers, Flynn, Putin, and Bannon, get the last laugh.

I hope I’ve got this very wrong.

a continuation of The Man in the High Tower: Thoughts on Accreditation Ceremonies and Trump’s Narcissism.

2/18/17
No surprise from the Washington Post: Trump Attempts a Reset with a Rally

Trump requires an admiring mirror. The politics of malignant narcissism. was originally published @ Lessons in Psychology: Freedom, Liberation, and Reaction and has been syndicated with permission.