On January 17th, Sullivan is producing a commemorative concert celebrating the birth of Martin Luther King Jr. and featuring Michigan State University (MSU) jazz orchestras and special guests such as Billy Childs, an internationally-acclaimed jazz composer who will perform a world premiere about human trafficking.
Michigan is giant hotspot for human trafficking, a form of modern day slavery. Usually, the media covers cases of sexual exploitation, however labor trafficking in Michigan is at least equal to the number of reported sex trafficking cases. To tackle the issue of human trafficking, Jane White founded and directs the Michigan Human Trafficking Task Force. Administered through the MSU’s School of Criminal Justice, the task force brings together over 90 agencies that include social services, law enforcement, and community resources to support victims and their recovery, something she coins as “collective strength through collaboration.” White, a former police officer and administrator, is determined to expand a network that educates communities on human trafficking awareness and action. She explains that the MSU community is a great support system as growing awareness is generated from student interest, and inspires others to get involved. 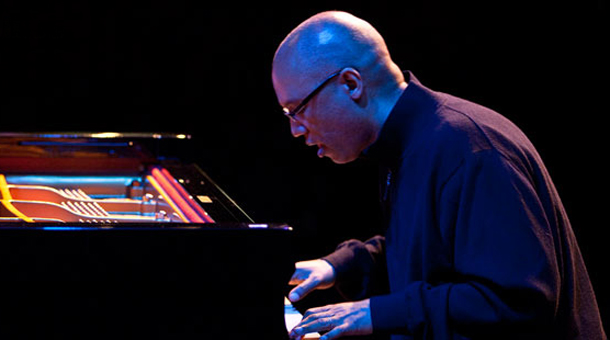 Sullivan’s involvement in the Task Force was ignited after viewing Cuatro Corridos, a chamber opera based on true stories of human trafficking survivors in San Diego/Tijuana. Gathering more information on human trafficking led him to talk with Jane White. Together, they learned more on the lack of research data on modern day slavery and ways the arts can aid in human trafficking awareness and education. In October 2015, the Task Force hosted an event called Human Trafficking: A Closer Look. It was a two-day conference where Sullivan presented research on human trafficking and a session entitled “Art Against Trafficking: Problems and Potentials,” with Bert Goldstein (director of the MSU Federal Credit Union Institute for Arts and Creativity) and Laura Swanson (a documentary filmmaker and dance choreographer).
Sullivan explained that human trafficking is an overwhelming topic and wants to create a way to present it in a way that “doesn’t dwell on the horror.” He strongly believes that arts can help raise societal awareness as educated/informed artists can effectively express messages that can make significant impacts. Wanting to present more events on human trafficking, he contacted Jim Forger, College of Music dean, and Rodney Whitaker, Jazz Studies director. Whitaker contacted Grammy winner Billy Childs who agreed to perform and write a new composition about human trafficking, along with originals that communicate the “anguish and isolation” a victim can feel in an inclusive manner.
White explained that Sullivan turned out to be an effective voice for a collaboration that bridges the harsh realities of sexual and labor exploitation with music. It opens people up to understanding and activism. In terms of a more systematic change, Sullivan said that there needs to be more research and reliable data on human trafficking. Only when more information is present can there be more informed decision making toward progressive change.
—
Luis Gay is a sophomore attending the University of San Francisco, pursuing a Biology degree and Biochemistry Minor. He is a Social Media Assistant at Cancer InCytes Magazine.
—
Reference:
Hills, Carla. Dec2015. “Human Trafficking Awareness through Music, Artistic Expression, and Collaboration”. The Engaged Scholar. [Accessed 22 Dec 2015]
Photo Credit:
This photo can be found at the Spektral Quartet.
https://static1.squarespace.com/static/55ff81e1e4b0fc002cb79f7b/55ff8a26e4b047e5f2e5ff5d/56044599e4b0d8d2fd0569f9/1443932189375/?format=1000w

Music is a powerful form of communication, effective in telling a story or spreading awareness. Mark Sullivan, an associate professor and director of the computer music studios at the Michigan State University College of Music, has worked to address human trafficking, reflecting the intersection between music, artistic expression, societal challenge, and community collaboration.

Using Music to Raises Awareness of Human Trafficking was originally published @ cancerincytes and has been syndicated with permission.