A Jury of Dzhokhar Tsarnaev’s Peers 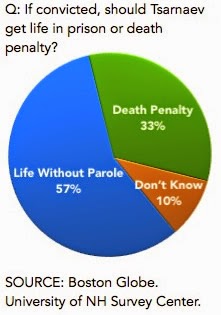 Jury selection is underway in Boston for the trial of Dzhokhar Tsarnaev. I took the jury survey and won’t qualify to serve for two reasons: I was a block and a half from the second explosion and under no circumstances would I support Tsarnaev’s execution even though I think he’s a monster.

I don’t know how many others share my view regarding Tsarnaev’s lack of humanity, but 57% of my fellow Massachusetts citizens would not vote for his death regardless of his guilt. Only 33% would.

I am in full sympathy with the urge to kill this beast but I want to live in a civilization where the state does not implement this desire. The majority of my fellow Bostonians appear to feel the same.

In the days that followed the bombings, my Back Bay and South End neighbors felt profound shock and dislocation. We comforted each other and talked through our absence of preparation. I live in a place where this violence was unexpected and where most of us were emotionally unprepared. We were vulnerable because our civil life allowed the reality or illusion of safety. Fortunately, we had heroic first responders who knew what to do. Although we despise Tsarnaev and what he and his brother represent, we remain in opposition to his execution. Killing him will not make us safer or undo our injury.

The dead are gone and the injured painfully soldier on. Most of us have gone back to walking our dogs, playing with our kids, and living a fortunate and protected life. We are the majority, the average citizens of this good Commonwealth. We oppose the death penalty much as we’d like to strangle the perpetrators with our bare hands. Perhaps this makes us hypocrites. Regardless, the people acceptable to serve on Tsarnaev’s jury are my community’s outriders, harboring whatever other beliefs support an examined or unexamined acceptance of state sanctioned murder. Massachusetts has not allowed this since 1947.

Tsarnaev’s fate will not be decided by my peers but, perhaps in some small way, his.

5/15/15 Those not representative of my community have passed judgment and are asking for Tsarnaev’s death.

Some further thoughts can be found in the entry: Choice, Sickness, and Evil. Some thoughts on clinical and moral language.

A Jury of Dzhokhar Tsarnaev’s Peers was originally published @ Lessons in Psychology: Freedom, Liberation, and Reaction and has been syndicated with permission.