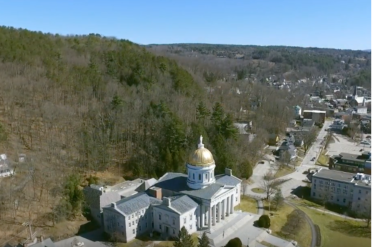 After the 2014 Vermont legislative session, Rep. George Till was picking himself up, dusting himself off and reflecting on what he called an “ALE…..or Adverse Legislative Experience” when his ambitious legislative vision fizzled into a tiny bubble of hope to create a trauma-informed state.

That bubble was enough to inspire  ACEs-related legislation — No. 43, H. 508, signed by Republican Gov. Phil Scott on May 22 — and policymakers are scheduled to start implementing the law next month. While the law calls for incremental steps, the long-term impact could be substantial.

When I spoke to Rep. Theresa Wood, a member of the House Committee on Human Services, soon after the bill passed in late May, she said Till, a physician,  deserves the credit for educating legislators about ACEs. Even just a year ago, she said, “a few legislators on the inside track knew about ACEs, now almost all of us do. It takes time to educate but it is well worth it. The unanimous votes in the House and Senate reflect the value of that work.”

Matt Levin, executive director of the Vermont Early Childhood Alliance, said thanks to Till, ACEs awareness in the Vermont legislature is very high—he was a “one-man band” for years on ACEs in the legislature.

Lyons is one of several legislators from the House and Sentate that have been named to the Adverse Childhood Experiences Working Group established in the law that also requires the group to meet on or before September 1. The group’s charge is “to meet to analyze existing resources related to building resilience in early childhood and propose appropriate structures for the most evidence-based or evidence-informed and cost-effective approaches to serve children experiencing trauma…”Till has introduced several ACE-related bills over the years and favored the stronger Senate version of the bill authored by Virginia “Ginny” Lyons, vice chair of the Committee on Health and Welfare. This legislation would have established a large and diverse Children and Families Trauma Committee within the Agency of Human Services to examine approaches to family

wellness, training for school nurses and increase incentives for voluntary screening in health plans that are part of the Blueprint for Health that covers most Vermonters.

According to Wood, the conservative approach taken in the bill was the result of a number of factors—the need to know what state programs are already in place that could be more effective if coordinated with other existing programs, the importance of seeing the full landscape of programs and filling in gaps (e.g., home visiting is available for first-born but not second children), being on solid ground before taking on a new program (e.g., what’s the evidence on universal screening in doctors’ offices), and consideration for the wise use of taxpayer dollars by focusing on results, not just “more and more” for kids. The bottom line, according to Wood, is for the state to make “strategic investments in resources in the right places, to achieve the best result.”

The law also calls for the Vermont Agency of Human Services to develop “a plan to address the integration of evidence-informed and family-focused prevention, intervention, treatment, and recovery services for individuals affected by adverse childhood experiences” by January 15, 2019. The same agency is charged with compiling data and background materials to help prepare the Working Group for making its legislative recommendations on or before November 1 of this year. The recommendations will be made to the House Human Services Committee and Senate Health and Welfare Committee.

In addition to provisions creating and supporting the Working Group, the law also recommends “the State Colleges and University of Vermont’s College of Medicine, College of Nursing and Health Sciences, and College of Education and Social Services include information in their curricula about ACEs and their impact on short- and long-term physical and mental health outcomes.”

This recommendation (not a mandate) comes at a time when the University of Vermont Medical School is retooling its teaching methods to encourage “active learning” through small group interactions rather than passive lectures, aka “sage on a stage.” The integration of ACEs into the medical school curriculum could be enhanced by the new teaching method—one that is geared to deepen students’ understanding of real world problems. These provisions apply to healthcare workforce—including physicians and nurses—and more broadly to social workers and educators in early learning and beyond.

The law states that the impact of ACEs is evident in the opioid epidemic, as well as in rising state child and family caseloads and rising health care costs. Wood said that the increase in the number of children in foster care as a result of the opioid crisis was a factor in the building support for the law.

In addition to signing this legislation, Scott has created the Opioid Coordination Council through Executive Order 02-17 to ensure “full inter- and intra-agency coordination between state and local governments in the areas of prevention, treatment, recovery and law enforcement activities.” The Council held its first meeting on May 8 and will make initial recommendations to be presented to the governor this October.

Even though Vermont is the least populated U.S. state, next to Wyoming, and has a part-time legislature with few staff supporting its work, there are some lessons from Vermont that are useful to any state considering ACEs-related legislation. Heading a coalition that provides advocacy services to small organizations that can’t afford full-time lobbyists, Levin provided these takeaways:
—  passing legislation takes time, on ACEs and almost any issue;
—  legislators themselves (not just advocates, associations) have to take up the issue and propel it forward;
—  the most effective lobbyists are the legislators. (While Lyons did not get the stronger Senate provisions she preferred in the final bill, she convinced the committee chair to put the issue on the committee agenda, leading to specific legislation that was ultimately conferenced with the House version, passed by the legislature, and signed by the governor, according to Levin.

In a recent email from Till, he expressed interest in what the Working Group will produce but also sees greater awareness of ACEs in the medical school and elsewhere. Nevertheless, he said, “there is lots of work going on around Vermont, but it is localized and not coordinated through the state. The good news is that there is more and more awareness of the subject.  I’ve made presentations at several places and have several more to come.”  Fortunately, Till is no longer the “one-man band” for ACEs.

Implementation of new Vermont law begins with the appointment of legislators to bicameral, bipartisan ACEs Working Group was originally published @ Elizabeth Prewitt – ACEs Too High and has been syndicated with permission.