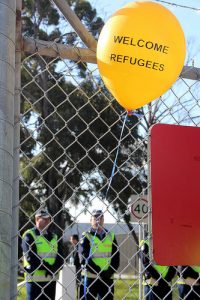 The Gillard Government made a commitment in 2010 to release all children from immigration detention by June 2011, but still 1000 children languish in the harsh environment of immigration camps around Australia. The Refugee Action Collective organised a protest on July 9, 2011 outside the Melbourne Immigration Transit accommodation which is used for the detention of unaccompanied minors.