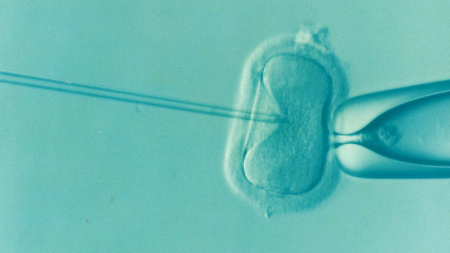 On Tuesday it was reported that the first live birth resulting from mitochondrial donation was born in New York to a Jordanian couple. According to The New York Times, the fertility procedure – also referred to as “3-parent IVF” – was performed at a Mexican clinic and the baby is a healthy boy.

The purpose of a donor for this couple was to “overcome flaws in a parent’s mitochondria that can cause grave illnesses in babies.” Thus, the DNA from the egg of the healthy mother who has the mutation, is placed in the egg of a healthy donor after her nuclear DNA is removed. It is important to understand that the mitochondria of a cell are completely separate entities from DNA that determines inheritance.

The Jordanian couple took their chances with the procedure as they had lost two other children to the disease, one at age 6

and the other at 8 months. Dr. John Zhang performed the procedure at the New Hope Fertility Center’s clinic in Mexico as it is “effectively banned” in the United States, though it has been legal in the United Kingdom since last year.

The child is now 5 months old and healthy with normal mitochondria, as was first reported by New Scientist magazine.

Even after the procedure and birth, attitudes of mitochondrial transfers remain suspicious and aversive. “While referring to the procedure as “three-parent IVF” makes for compelling copy, in reality, it is not accurate…it’s also not nearly as controversial or ethically problematic as the ‘three-parent’ moniker makes it sound,”  Fordham University’s Center for Ethics Education Dr. Elizabeth Yuko discusses in an article in The Establishment.

There are ‘slippery slope’ arguments that people use as an objection to this procedure. The first is the idea of people are using it to “serve as a means of creating the perfect human by combining the DNA of those with desirable traits,” according to Dr. Yuko. However, the mitochondrial donation is solely performed to prevent life-threatening genetic conditions from being passed down to children. Other criticisms of the procedure include it being “unnatural” and used to create “designer babies.”

Additionally, character traits such as those contributing to appearance (hair and eye color) are carried in nuclear DNA, meaning that is is impossible to create “designer babies” from donor mitochondria. Dr. Paulson, president-elect of the American Society for Reproductive Medicine, declared that that the ban “is not scientific, not rational, [and] not evidence-based.”

As far as ethics are concerned, Dr. Yuko concludes, “What we should be concerned about is reproductive policies that restrict necessary care or limit options for potential parents—not a poorly-named tactic used to limit life-threatening medical conditions.”

First Baby Born Via ‘3-Parent IVF’ Raises Ethical Questions was originally published @ Ethics and Society and has been syndicated with permission.