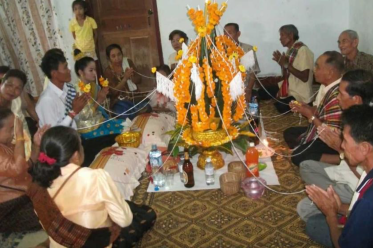 Photo: Lao wedding in the U.S.

Making do with what you’ve got

There are a lot of stories about refugees in the news. Some years ago, I helped resettle refugees from the Vietnam War. Trauma and resilience define what it means to be a refugee. All of them had lived through years of warfare. They had seen friends and family members killed. They had to flee the familiar towns and villages they had lived in all their lives. They arrived in a new country with hardly any resources, in a land where nobody spoke their language or understood their customs. Could you do that?

What they did possess was resilience. You had to believe that somehow, you would survive, despite all the horrors that you had already experienced. Those who didn’t simply did not become refugees. They couldn’t or wouldn’t give up everything they knew, risk death or imprisonment if caught, and wait in limbo for years in a refugee camp. All that and more, for the less than certain possibility of admission to some country willing to take them in. Here is a story about my interaction with one of them.

Sopath (not his real first name) was from Cambodia, in his mid-fifties, had just arrived in the U.S. and was not talkative even in his native language. His entire work experience, from what my interpreter could gather, consisted of pulling a plow behind a water buffalo. And I was supposed to find him a job.

Running the employment section of a refugee resettlement program, I had dealt with these kinds of issues before, but this case felt

different. When refugees were referred to my program, most were understandably anxious. A few were actually enthusiastic. In my experience, the Lao as a people tended to be gregarious and chatty, while Cambodians like Sopath were usually more formal and reserved. His affect was totally flat.

Working through my interpreter, I tried to collect a few more details about his life. But he simply was not present. It was as if the “Farmer, water buffalo” comment was as much as he could manage.

I looked through his file to see if I could learn anything else. I couldn’t figure why the communists had targeted him, since farming is as inoffensive a job as I could imagine. So little about that regime made any sense. The Khmer Rouge had killed between one and a half to three million of their own people. They killed people simply for wearing glasses. They assumed they were intellectuals.

Sopath had spent the last several years in a refugee camp, where, among other things, he had done well enough in English class to be placed in my employment program. It appeared that he had recently learned the fate of some family members. Before the war, he had a wife and ten children. Now he had two children. Everyone else was dead. That realization probably dominated his life.

Speaking through my interpreter, I said, “I cannot imagine what you have seen or what you are feeling now. But one thing is true in America. It is true in Cambodia. You have two children. You are their father. You must care for them, yes?”

“So, what kind of work do you think you could do?”

After some prodding by my interpreter, the answer came back. “Farmer.”

Now, I’m not sure what kind of response I was hoping for, but that was not it. As a condition of receiving public assistance, people in my employment program were required to do “job search,” actively look for employment. Ideally, I would help them to identify leads and even place them in positions. At minimum, I was required to document that they had applied for at least five jobs every week.

If he had been in the army, he might have at least had some transferable skills. There was not a lot of demand for farmers experienced with water buffalos. On paper, he spoke English well enough to be looking for work. But he barely had the energy to get up in the morning and seemed to be wandering about in a daze.

This was in the early eighties, before terms like “post-traumatic stress” were common. When you asked for any kind of mental health services for refugees, most agencies did not have interpreters or experience treating people from Southeast Asia. Sometimes they suggested going to the Indochinese-American Council. That wasn’t much help, since they only had about a dozen staff and no mental health services. I should know, since that’s where I worked.

I went back to his file for ideas and realized that I had helped to move Sopath into his apartment a few days before. It was a small ground floor apartment in a run-down neighborhood, with dirty walls and a postage stamp sized, weed-filled patio area. Suddenly I had an idea, not a great one, not entirely legal, but at least an idea.

“Fine,” I said, “You want to farm, you will start by digging a garden. We will get you a shovel and some seeds. By Friday, you will dig a garden in your patio. I will come to your house and check.”

Now, my interpreter was very good at following orders. If I told him to tell someone that the moon was made of green cheese, he would tell them exactly that, in a forceful voice. But after the client left, he said, somewhat reprovingly, “That’s not job search.”

“No,” I agreed, “But he needs to focus on something. In the meantime, we need to figure out what we can do that will get him kicked out of our program, but still get benefits.”

It took two weeks for me to schedule a retest of his English proficiency. After digging a garden, the next week I had Sopath repaint the walls of his apartment. Each week, I signed off that he had completed his “job search” activities. When he took the test, his score was not as high as before. He was dropped from the employment program and placed in one of our English classes.

His English teacher complained that if I had only told him about the retest, he could have helped Sopath prepare and he might have scored higher. My poor interpreter probably could never figure out when and why my reading of the rules would occasionally take a sharp left turn from his own understanding of the regulations. Sometimes, you just have to do what feels right.

We often complained that most refugee camp English classes did not teach the kind of “American” English people really needed to get by. More importantly, attending our classes helped folks to learn basics, like bus schedules, school registration and going to a supermarket. (Their first visit to a supermarket was always a shock. An American supermarket has more food in one place than many of them had seen in their lives.)

So he spent the next several months in English class with other refugees, slowly growing more accustomed to life in general, and to life in America in particular. By the time he graduated and entered the employment program for the second time, he actually spoke on his own.

I got Sopath a job at a plastic molding company packaging medical supplies. There were several refugees already working there. While they were not all from the same country, they formed their own support group, sharing rides and explaining the rules to each other. They kept a rice cooker in the break room, and everyone brought something to share for lunch. Whenever I brought a new person, someone in the group would show them the ropes.

How did Sopath’s life turn out? I don’t really know. Service programs are about interactions and outcomes, not relationships.  In employment services, clients placed and still working 90 days later were counted by the state as “employed” and we closed their case files.

That company would occasionally need new employees, so I can at least report dropping by and seeing him still at that job about a year and a half later. In that time, many more refugees had arrived and many others had come and gone through my employment services program. Like the staff in an Emergency Room, you sometimes see folks at the worst time in their life. You hope for the best and move on to the next case.

Now, a few of the refugee families did stay in touch. I was even invited to some of their children’s weddings. These were especially happy affairs, because it felt like the whole community was returning to a normal life.

The Lao weddings were especially elaborate affairs. Part of the ceremony consisted of a large display of fruit and flowers (as seen in the photo), with chanting by a monk. I asked what the monk was saying, and was told that he was inviting spirits to come to help celebrate the event.

This included not just the spirits of those who had passed, but even those of the living. Sometimes even the living, I was told, get distracted by troubles and worries and need to focus on being present. The monk was inviting all the spirits to come. Enjoy the sight and smell of the beautiful flowers and the delicious taste of the fruit. Be present.

I’m not really sure how accurate the explanation I got was, but I hope it’s true, because I really like the concept. In my story, Sopath’s spirit was lost, and needed time and help to return to the here and now. As a society, we could really use a lot more ceremonies and services to help people’s lost spirits find their way back home.

Assisting refugees: Lessons on trauma and resilience was originally published @ ACEs Too High and has been syndicated with permission.