Legislation to End Conversion Therapy Introduced in the Senate

Following a White House report released in October condemning the use of conversion therapy, Senators Cory Booker (D-NJ) and Patty Murray (D-WA) have introduced legislation to end the harmful practice.

The Therapeutic Fraud Prevention Act would empower the Federal Trade Commission to crack down on so-called “conversion therapy” that falsely claims to change a person’s sexual orientation or gender identity, according to a press release from Senator Booker’s office.

“This so-called therapy is harmful, especially to children,” said Booker, who last year introduced a Senate Resolution condemning the use of conversion therapy. “Our legislation will remove any question that the FTC and State Attorneys General have the tools they need to classify conversion therapy as what it is – fraud – and ban its use. Conversion therapy is a discredited, harmful practice that has been rejected by countless medical and mental health organizations for years. It has no place in our society.” 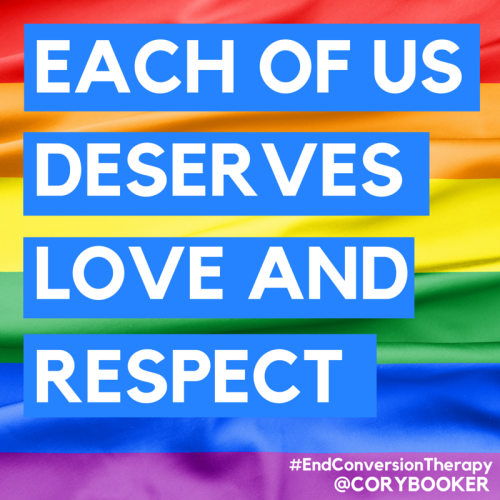 The expert panel and report was commissioned following  White House support for a bill that bans all therapies aimed at changing sexual orientation or gender identity. The bill known as “Leelah’s Law” was developed following the December 2014 suicide of Leelah Alcorn – a 17-year-old transgender woman, after her parents made her attend conversion therapy.

The panel was convened by the Substance Abuse and Mental Health Services Administration (SAMHSA) and the American Psychological Association (APA) earlier this year, and included prominent figures in LGBT human rights, policy, research, treatment, and advocacy, including Fisher.

Click here to read more about the SAMHSA report from October

Legislation to End Conversion Therapy Introduced in the Senate was originally published @ Ethics and Society and has been syndicated with permission.