A viral campaign is subtly helping domestic abuse victims with the help of a simple black dot. The Black Dot

Campaign encourages victims to draw a black dot on their hand as a nonverbal signal for help. Their mission is for friends, family, doctors, and many more to recognize that a person needs help but cannot ask for it. This initiative was started by a domestic violence survivor who was been through physical, emotional, and sexual abuse. Because of her experience, she wanted to help people like her, who too often suffer in silence.

Many have praised the campaign such as Danielle Tredgett, a former victim of domestic abuse, who wishes a movement like this was around earlier. However, others have concerns about safety. Due to its increasing popularity, 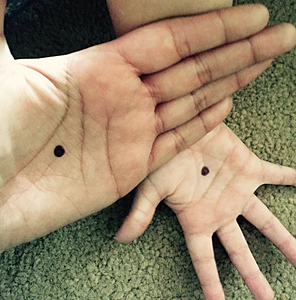 what if the person committing the abuse knows what the black dot represents? To respond, the founder posted on Facebook stating that any idea of  “help” in these situations have risks. It is why we continue to develop new strategies to help. The founder further noted the black dot is situational as each domestic abuse case is difference. Only the victim knows what triggers their perpetrator and what is safe to do under their conditions. Polly Neate, chief executive of Women’s Aid, explained to HuffPost UK Lifestyle she realizes the potential danger of the black dot, although it is very useful to have an array of options for victims as every woman’s circumstances vary greatly. Another concern was brought up by Mark Brooks, chairman of ManKind Initiative. While fully supporting the movement, he believes that it is not very inclusive of male abuse victims. He remarked that the Black Dot’s official video only shows female victims, something that is not the reality of abuse today.

Meanwhile, Black Dot’s founder is very pleased with the results of her campaign. It is opening up discussions on domestic violence and raising awarenessof the issue all around the world. She is proud that the campaign has helped people obtain the services they didn’t feel strong enough to access. In the first six days that it has taken off, the Black Dot campaign has reached 4.8 million people.

Many perpetrators monitor their victims extremely closely. Anyone who is feeling frightened should contact the National Domestic Violence Helpline or go to www.womensaid.org.uk for advice and support. For more information of the movement, join Black Dot’s Face

Luis Gay is a sophomore attending the University of San Francisco, pursuing a Biology degree and Biochemistry Minor. He is a Social Media Assistant at Canc

This photo can be found on Black Dot’s Campaign’s Facebook page. https://www.facebook.com/blackdotcampaign/photos_stream

Black Dot Campaign: A Subtle Way to End Domestic Abuse was originally published @ cancerincytes and has been syndicated with permission.