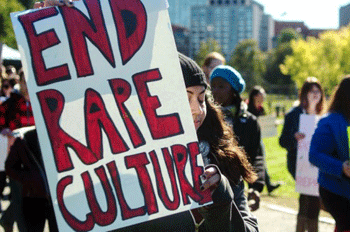 The first year at college is often an eye opening and life changing experience, but for some female women, it can change drastically. One in five female students are raped in their first year and also have increased risk of being raped again. According to The Journal of Adolescent Health, women are six times more likely of being raped during their first year of college if they have been previously assaulted than women who have not encountered sexual violence before.

The New England Journal of Medicine conducted a randomized trial studying first year students on three different Canadian campuses. Those within the study group were given education and attended sessions on defining personal sexual boundaries, self-defense, and assessing risk. Compared to a control group that only received brochures and a brief session, those at risk of rape decreased by half in the study population. The study suggested that if 22 women participated in a similar program, one additional rape during the school year could be prevented among female students.

The main focus of the rape prevention program was on training the women who could become victims rather than on the attitudes and behaviors of perpetrators. There were four sessions that were three hours long that could be taken during the school week or the weekend. During their sessions, female students learned more about self-defense and resistance alongside problem solving, discussion, and role-playing. They also learned about strategies to protect themselves during social gatherings. These solutions included covering a drink at bars to prevent the consumption of date-rape drugs and having a buddy system.

Even though it is important that women learn how to defend themselves if they ever encounter this kind of situation, the long-term goal is to reduce the need for these women to protect themselves from rape. The sessions were also limited as the female students were taught about stranger rapists instead of the most common form of rape that could happen with a romantic partner or acquaintance. The inclusion of intimate partner rape is a concept that could be considered for the future.

—
Kristine Alarcon graduated at the University of San Francisco with a Bachelors of Science in Biology. She is working towards certification in Sterile Processing and Distribution. She is a Social Media Assistant at Cancer InCytes Magazine.
—
References:
Hoffman, Jan. “College Rape Prevention Program Proves a Rare Success.” New York Times. Retrieved on June 12, 2015. http://www.nytimes.com/2015/06/12/health/college-rape-prevention-program-proves-a-rare-success.html?_r=0
Photo Credit: https://www.laprogressive.com/college-campus-rape/

Rare Success in College Rape Prevention Program was originally published @ Cancer inCYTES Blog and has been syndicated with permission.