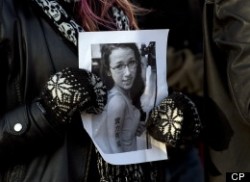 A woman holds a photo as several hundred people attend a community vigil to remember Rehtaeh Parsons at Victoria Park in Halifax on Thursday, April 11, 2013. The girls family says she ended her own life last week following months of bullying after she was allegedly sexually assaulted by four boys and a photo of the incident was distributed. THE CANADIAN PRESS/Andrew Vaughan