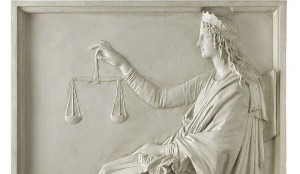 The bas-relief is part of a group of thirteen plaster casts – representing allegorical figures, scenes inspired by the Iliad, the Odyssey and Phaedo, and depicting two works of mercy – in the Foundation’s Congress Centre. The reliefs were executed by Canova as a gift for Abbondio Rezzonico, a member of the Roman Senate, between 1793 and 1795. Rezzonico had already commissioned from the sculptor the commemorative monument to his uncle Pope Clement XIII [1], which was erected in St. Peter’s but not unveiled until 1792, twenty-three years after the Pope’s death. In 1781, the Veneto artist had executed for the Senator the statuette Apollo Crowning Himself [2] now held by the Getty Museum in Los Angeles. Evidently the two men were on very friendly terms, probably also because they were both from the Veneto region. A frequenter of Rome artistic circles, Rezzonico also commissioned works from Piranesi and Pompeo Batoni – who immortalised him in a portrait now in the Museo di Bassano del Grappa. The bas-reliefs were hung in Villa Rezzonico at Bassano to create a “Canovian room”, as attested by 19th-century sources, similar to those in other aristocratic residences in Veneto (those of Zulian, Renier, Falier, Albrizi, Barisan, Cappello) as well as Rome (Villa Lante, Villa Torlonia). There is evidence that in the course of his career Canova produced various series of bas-reliefs, sometimes with different subjects, to satisfy the demands of collectors who kept up with all the current artistic trends. The most complete series of plaster casts, which were never executed in marble, is in the Gipsoteca in Possagno, and another series very like the one in the Cariplo Collection, is located in the Museo Correr, Venice.

The technique used to execute them was the lost wax process, which enables a one-off piece to be produced from a cast obtained from a prototype: this allows the artist to work on the plaster and to give it a unique quality. We know that Canova was in the habit of emphasising this original aspect also to justify the cost of producing the pieces, although he delegated the actual production to talented assistants like Vincenzo Malpieri.

The desire to promote his own work led Canova, spurred on by the intellectuals of the day such as Pietro Giordani and Francesco Leopoldo Cicognara, to reproduce his sculptures in engravings, in order to make his production more widely known through an economical, straightforward medium. The collection of prints dedicated to “Connoisseurs and Lovers of Fine Arts”, published by the Rome bookseller Pier Luigi Scheri in 1817, is one of the finest examples of this, and the sculptor invited some of the leading artists then active in Rome, including Vincenzo Camuccini, Raffaello Morghen, Jean-Baptiste Wicar, Tommaso Minardi and Francesco Hayez, to work on the project.

Engravings of most of the plaster reliefs were executed, with the exception of the three Allegories connected with the design for Clement XIII’s tomb.

The story of the Rezzonico reliefs is documented in the writings of the Rome antiquarian Giovanni Gherardo de’ Rossi: in 1793 Hope and Charity, casts made from the figures sculpted on Clement XIII’s sarcophagus, were delivered; Achilles Delivers Briseis to Agamemnon’s Heralds, Death of Priam and Socrates Drinking Hemlock can be dated to the same year; and Socrates Taking Leave of His Family, Dance of the Sons of Alcynous and Return of Telemachus and Justice, to 1794. The latter is the most interesting piece in the group, since it is the artist’s original study – and therefore not featured in other series – for a figure that does not appear in the final version of the funerary monument completed between 1784 and 1792. Lastly, Crito Closing the Eyes of Socrates and Hecuba Offering the Robe to Pallas arrived in Bassano del Grappa in 1795. To the same year should be dated Feed the Hungry and Teach the Ignorant, possibly executed on Rezzonico’s wishes, since he placed them in a school for children established on the premises of his villa.

In all probability, and with the exception of the two pieces depicting works of mercy, the idea for the prototypes was developed some years earlier, as stated in Canova’s biography in Bassano: in point of fact they were executed at the same time as the funerary monument to Clement XIII, between 1783 and 1792. The technique of the plaster relief enabled Canova to experiment with a new language that was wholly Neoclassical and thus devoid of decorative elements and strict rules of perspective. These works reveal the sculptor’s attempt to adapt to contemporary literary canons, using a style that was spare and dramatic to the point of being expressionistic.

The bas-reliefs stayed in Bassano until 1837, when they were sold to the collector Antonio Piazza, who hung them in his mansion in Padua, which was later bought by the Counts of San Bonifacio. From there they went, as part of an inheritance, to a country house on the Verona plain, and were purchased by the Cassa di Risparmio delle Provincie Lombarde in 1991.