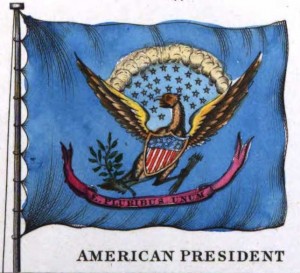 A flag captioned “American President” from an 1848 book, apparently from the 1830s or 1840s (the book’s U.S. flag is the 1837-1845 26-star version, and this flag has 26 stars as well). The book does not give any details about the use of the flag, and there is apparently no record of such a flag ever being in official use (the first known official presidential flag was later in 1882). The flag does have some similarities to the modern version, such as the arrangement of the clouds.