Our Two Sets of Books: Motivation, Self-Deception, and Bad Faith 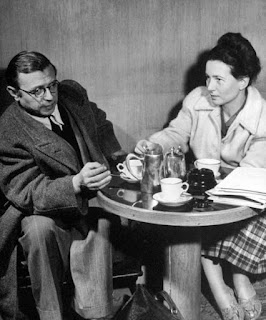 She is profoundly aware of the desire she inspires, but the desire cruel and naked would humiliate and horrify her. Yet she would find no charm in a respect which would be only respect…. she refuses to apprehend the desire for what it is; she does not even give it a name…. But then suppose he takes her hand….to leave her hand there is to consent in herself to flirt, to engage herself. To withdraw it is to break the troubled and unstable harmony that gives the hour its charm. The aim is to delay the moment of decision…. We know what happens next; the young woman leaves her hand there, but does not notice that she is leaving it. John-Paul Sartre, Being and Nothingness

I see people who tell me they don’t understand their transgressions against their “strong moral compass”. It should be no surprise that the subject is often sex. (If not sex, it tends to involve money or violence.) When caught and confronted they act bewildered, claim their action was out-of-character, or a result of seduction or coercive pressure. They give lip service to ideals they say guide them while not acknowledging what they actually did when sufficiently tempted or when the chips were down.

I see this with men who have been caught in an affair. They claim, and I believe them, that they don’t want out of their marriage and that they love their wives and families. The intense distress they exhibit when caught speaks to their recognition of what they have to lose. Often enough, they deny understanding why they got involved in the first place.

I’m not talking about the people who betray their vows, want to get away with it, and know damn well that when sufficient opportunity occurs, they’ll go for it. They are not fooling themselves even while they make excuses or claim innocence. They know they are lying.

I’m interested in the people who don’t know they’re lying to themselves. With them, I offer the image two sets of books, an accounting concept for hidden assets. One ledger is filled with the ideals they say count heavily, their “moral compass”, while the second, hidden from sight, is only opened reluctantly but carries greater weight. While denying or not acknowledging the significance of this second text they engage in the self-deception that Sartre called bad faith.

The hidden ledger holds strong desires and denied values: motivations or reasons for action, suppressed from immediate awareness that often have one significance in common. They want something that can’t be openly owned without guilt, anxiety, or mortification. Often this concerns a compensatory aim that if sufficient opportunity arises, is an offer that won’t be refused.

When acting from denied motives, it’s unsurprising if the outcome is bungled and unfortunate. This unhappy outcome is often the initial reason they come to my office where my job is to empathetically allow the hidden, deceptive, and disowned to become available for examination and negotiation. It would be negligent not to. Owing up to this self-knowledge is part of the heart of the analysis of the resistance, a fundamental activity in psychoanalysis. Sometimes this involves confronting unconscious motivation but probably more often, motivations we’re reluctant to see, but could. We resist knowing and acknowledging these facts about ourselves (and others) even as our defensive negligence incurs its high cost.

It’s natural, at times, to be at odds with oneself, to have values hard to reconcile where we can’t have it both ways. We’re defensive about this when our goodness and morality are at stake. Here’s a brief self-serving example. Some weeks ago, mid morning, I was enjoying the frustrations of fishing inside the bay below the gut on Cape Pogue. After hours of casting, I reeled in a beautiful but wee too short striped bass. I love the taste of bass in the morning. There’s no one on the beach but my wife and dogs. My grill’s in the back of the jeep. Did I mention I was hungry? Reluctantly, very reluctantly, after measuring the fish and confirming what I already knew, three inches short of the legal twenty-eight, I eased the poor stripper back into the water. I’m conflicted. I’m hungry. I love grilled stripper, know I can get away with keeping it, but throw it back just the same. Why? Because I’m a surf-caster who knows and accepts the conservation rules. They’ve worked to restore what had been a dangerously diminished stock. So I tolerated mixed feeling: the pleasure in the catch and the frustration but also satisfaction in the release. (It is satisfying to do the right thing in a tradition I respect. Fishing ethics matter to me.) It would be different if I was starving. It might be different if I was much hungrier, I can’t be sure. So I smiled at my wife, asked the dogs to shut the fuck up, and had enough bars to call the Shanty in Edgartown. I’ll settle for their lobster rolls and a bloody Mary.

I was working from the same playbook that morning, motivationally conflicted or not. At odds with myself, but not that much. And I knew it. (Plus, now I can use it as an example here to illustrate my point and to show you what a sportsman I am).

Are sexual transgressions all that mysterious? Consider the nature of actual human motivation. Why do people do what they do? The simple answer is that circumstance present opportunity. (What makes it opportunity is that it is something wanted, valued). Of course, the circumstances that provide opportunity have more than a few moving parts. We recognize pros and cons, or should. And not all pros and cons carry the same motivational weight, regardless of what we claim about our character. The actual weights, stable, subject to revision, claimed, disowned, or unconscious are a fundamental feature of our individual differences, whether we acknowledge it or not. But our neighbors and intimates will carry the burden of our neglect.

Some Descriptive Psychology, Psychodynamics, and a bit of Freud.

A person’s reasons for action can be grouped into four categories: Hedonics, Prudence, Aesthetics, and Ethics. Moral standards will find a place in both our prudential and ethical concerns. The four are intrinsic motivations, understandable without further justification. Having an intrinsic reason is having reason enough to do something. These motives have a complex and dynamic relationship to each other as a person weighs what to do in any given circumstance. This weighing of values can be immediate, a matter of careful deliberation, unconscious, or some combination.

Why is problematic sexual behavior so often a feature of self-deception? (I’ll turn to violence and money in a later posting). The simple answer is the motivational category of Hedonics, the intrinsic value of pleasure and the compelling, often automatic, pull of the erotic. Add to this the common polyerotic disposition that comes with our primate body. Sexual desire is not always countered by prudent self-interest or the ideals that a person claims as their ethics. To make it more complex, the actual weight given to ethical standards may require the recognition of choice. Such mindful recognition might not be as immediate or compelling as the erotic. We don’t ordinarily choose what turns us on. Over time most of us learn to exercise prudent caution regarding tempting circumstances and mortifying outcomes. These recognitions may become automatic and immediate as part of how we see things. We can, if our moral-ethical perspective counts enough, turn away from desire even while it aches. The complication is that renunciation is a deliberate action, involves choice, requires self-knowledge. To the extent a person’s actual motivations are, for whatever reason, unavailable for self-examination, they are apt to result in problematic acting out with bungled or otherwise unfortunate outcome. What isn’t self-acknowledged cannot enter into good-faith negotiation. What isn’t acknowledged cannot be the focus of reconsideration nor the socialization of sharing with a trusted companion. What is motivating but unacknowledged confounds emotionally competent judgment and compromises life.

Here’s an illustration called the The Psychodynamic Judgment Diagram that parses out the components of judgment or appraisal that results in an action. Domain 1 corresponds to the open book. Domains 2 and 3 to the less acknowledged ledger. 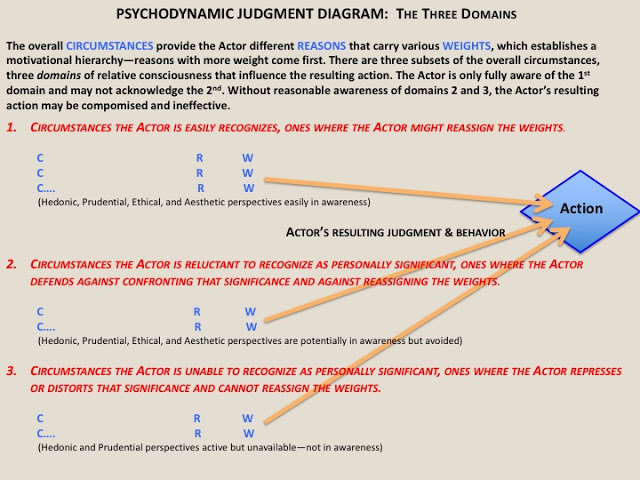 If you’re interested, the posting Bad Faith, Self-Deception, and Unconscious Motivation: Restrictions in Effective Choice explain and elaborate this model.

Our Two Sets of Books: Motivation, Self-Deception, and Bad Faith was originally published @ Lessons in Psychology: Freedom, Liberation, and Reaction and has been syndicated with permission.