Degradation Ceremonies and the Goldwater Rule: A note on clinical diagnosis, community, and moral indignation.

My vigilance and preoccupation with the incompetence, bluster, and threat pouring from the White House is exhausting.  I should have better things to think about.  Worry and indignation coerce my attention, stink like dog shit I can’t ignore or avoid. It needs to be cleaned up.

I am a clinical psychologist with license to diagnose and a citizen now over-disposed with indignation. Trump comes across as deeply disturbed, but my daily concern is that he’s so disturbing. Although ethically problematic to diagnose from afar, I’m on firm moral ground speaking about my disdain and disgust. Two years back, writing about monsters and evil, I wondered about the differences of moral, legal, and clinical language.  Along with struggling with my preoccupations, these uses of language are on my mind.  Frankly, a diagnosis might suggest disability, a sort or excuse that lets Trump off the hook. I don’t find that satisfying or adequate when it comes to our President. (I just avoided the impulse to write “so-called” but it fits the degradation ceremony I have in mind).

In an earlier essay I wrote, “Clinical language is appropriate when the goal is to avoid the moralistic stance of blame and to facilitate empathy. We appeal to clinical language when we examine the personal history of the character in question. This can help our understanding. It provides the mitigating facts. It facilitates psychotherapy, disclosure, and confession. We use clinical language to explore a performance under the guise of not being judgmental.

But at times judgment is called for. Clinical and moral language may cover the same performance but with different intent and significance.  Moral language is appropriate when blame is at stake and where agency is treated as irreducibly given. Moral language is employed when we judge a person’s place in our community. We employ concepts such as evil when we make the judgment that a person’s actions reveal they are not, and perhaps never were, one of us in good standing.”

On February 13th, a letter to the New York Times, authored by an old classmate of mine, Lance Dodes, and signed by 34 other mental health professionals argued that,

“Silence from the country’s mental health organizations has been due to a self-imposed dictum about evaluating public figures (the American Psychiatric Association’s 1973 Goldwater Rule). But this silence has resulted in a failure to lend our expertise to worried journalists and members of Congress at this critical time. We fear that too much is at stake to be silent any longer.

Mr. Trump’s speech and actions demonstrate an inability to tolerate views different from his own, leading to rage reactions. His words and behavior suggest a profound inability to empathize. Individuals with these traits distort reality to suit their psychological state….”

The next day, that letter provoked a response from Allen Frances, the chairman of the task force that wrote the Diagnostic and Statistical Manual of Mental Disorders IV. Frances replied,

“…Most amateur diagnosticians have mislabeled President Trump with the diagnosis of narcissistic personality disorder. I wrote the criteria that define this disorder, and Mr. Trump doesn’t meet them. He may be a world-class narcissist, but this doesn’t make him mentally ill, because he does not suffer from the distress and impairment required to diagnose mental disorder.

Mr. Trump causes severe distress rather than experiencing it and has been richly rewarded, rather than punished, for his grandiosity, self-absorption and lack of empathy.

….. Psychiatric name-calling is a misguided way of countering Mr. Trump’s attack on democracy. He can, and should, be appropriately denounced for his ignorance, incompetence, impulsivity and pursuit of dictatorial powers.

His psychological motivations are too obvious to be interesting, and analyzing them will not halt his headlong power grab. The antidote to a dystopic Trumpean dark age is political, not psychological.”

It is arguable whether Trump “does not suffer from the distress and impairment required to diagnose mental disorder.”  I don’t have first-hand clinical data, but I stand with shared certainty when Frances writes, “Mr. Trump causes severe distress…” And when he points out, “He can, and should, be appropriately denounced for his ignorance, incompetence, impulsivity and pursuit of dictatorial powers…. The antidote to a dystopic Trumpean dark age is political, not psychological.”

Here’s what I think. The sterile, ostensibly nonjudgmental use of clinical language, the diagnosis of narcissistic personality disorder, misses the point, whereas my judgmental and degrading appraisal of Trump as a thin-skinned, ignorant, self-absorbed, entitled asshole doesn’t. That appraisal doesn’t violate the Goldwater rule. I can make that judgment based on the effect of his public performance, regardless of the state of his psyche. Clinical language gets in the way of confronting his effects on others.  A more honest option, moral condemnation, directly addresses his standing in community. The place of moral language is when judgments of disgust and indignation, of community violation and outrage are appropriate. This our call.

We are all in a position to assert, as an act of community, an affirmation of the essential shared values of truth and justice.  As a 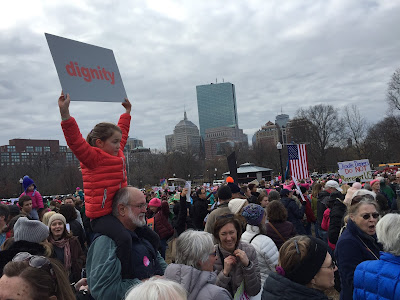 community of Americans, apparently still a majority, we have the standing to witness, denounce, and judge this vile perpetrator. Whether or not Trump eventually requires the legal language of “treason” and “impeachment”, for now moral language fits. It does the trick. It brings us together.

Degradation and accreditation ceremonies require a community that honors shared values required to remain a member in good standing. Isolation and lonely preoccupation are insufficient, inadequate as antidote when the dilemma “is political, not psychological”.  And community is essential not just to address the political but as a remedy for the psychological.  We are facing an extraordinary psychological stress. With the possible exception of the days that followed the Kennedy assassination, and maybe during the Watergate hearing, I’ve never witnessed this much anxious attention and preoccupation with the state of America and American leadership. The point of good governing is to be free to attend to other things. Many of us are not.

For far too many, America does not feel like a safe place.  When those in charge who should be adult look mad and incompetent, the unresolved vulnerabilities of childhood awaken. This vulnerability stokes personal fears and traumas and an unsettled memory of mine.

An October midmorning in 1962, I was twelve and scared, pacing the playground and refusing to go back to class, needing to listen to the transistor radio I’d brought to school after hearing the factory my father worked, Lithium Corporation of America, was a potential target of rockets headed for Cuba. This last month I’ve felt glimmers, uncanny resonances from that day.

The bombardment of lies, absurdity, and threat has been relentless since January 20th. The signal to noise ratio hard to decipher. With friends, family, and clients, I’ve never seen so much preoccupation or defensive avoidance.  A sense of necessity undermined by helplessness. Only a month in, and already many of us face exhaustion, demoralization, or numbed indifference. So what can we do? 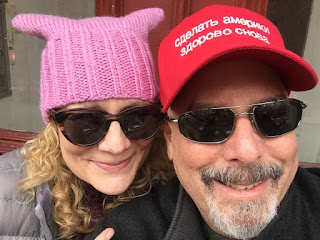 I avoid crowds. I don’t like to be in the midst of large groups of strangers. I love fireworks but spending a 4th of July on the Esplanade is now unthinkable. But the Saturdays of the Woman’s March and the demonstration that immediately erupted in the wake of the Muslim ban offered me comfort and joy, hours of restoration. A companionship of strangers sharing the vitality of united indignation. One sign in particular evoked laughter and hope, “Listen asshole, we can do this every week!”

Demonstrations are not enough, but a necessary first aid. Demonstrations also scatter seed crystals that can organize larger, stronger structures. We need many structures, communities of separate and overlapping interests to harden rock-like to smash the threatening tyranny. Action, participating in what we intrinsically value provides satisfaction. We’ll need a lot of that to persist and resist.

Here’s a practical guide to community action: INDIVISIBLE
A PRACTICAL GUIDE FOR RESISTING THE TRUMP AGENDA.

Take part. As Woody Guthrie said, “Take it easy, but take it.”

All together now, Sing!

Degradation Ceremonies and the Goldwater Rule: A note on clinical diagnosis, community, and moral indignation. was originally published @ Lessons in Psychology: Freedom, Liberation, and Reaction and has been syndicated with permission.