Wynn Schwartz Ph.D June 16, 2015
Wynn Schwartz Ph.D
The Foundations of Behavioral Science
“I am myself and my circumstance.” Ortega y Gasset
“…These concepts: proposition, language, thought, world, stand in line one behind the other, each equivalent to each. (But what are these words to be used for now? The language-game in which they are to be applied is missing.)” Ludwig Wittgenstein
Despite what we are sometimes told, we know what we are. This knowing is essential to the competence required to function as a person in the company of others. But what we implicitly know is not always respected in the theories that serve as behavioral and social science. When this understanding is absent in research, formulation, and theory, something vital is missing. It feels awkward or just wrong. Such inquiry or explanation starts with the spoken or unspoken premise that things are not as they seem regardless whether a compelling case is made that justifies this discrepancy. In direct contrast, The Person Concept, the cornerstone of Peter Ossorio’s Descriptive Psychology, makes explicit our implicit understanding. It provides a systematic and coherent foundation for building behavioral science by identifying the fundamental elements and transition rules required for a unified science of Persons. The absence of this underpinning has resulted in behavioral sciences that appear as a collection of unconnected theories,”silos of knowledge”, that often rest on problematic root metaphors and more resemble waring theologies than systematized science. In compensatory response, some practitioners appreciating this eclectic embarrassment claim to engage in “integrative” practice, theory be damned. Oh, would it be true.

Consider how normal science is supposed to work. Every observation and theory should have transition rules that allow for a coherent connection to all other claims made by scientists. The subject matter’s empirical assertions, laws, grammar, and transition rules should, as a goal, seamlessly connect without contradiction. Astronomy and particle physics, organic and inorganic chemistry, genetics and neurophysiology should produce a coherent, potentially interconnected body of knowledge. When such connection is neither apparent nor formally possible, a systematic reworking is called for. This is generally recognized by the community of physical and natural scientists. Unified theory has not been achieved within the physical and natural sciences but is arguably a goal. Thomas Kuhn made this clear quite some time ago when he pointed out that a scientific scaffold corrupted by anomaly and contradiction eventually calls for revolution and reformation.

In 1976, Peter Ossorio wrote in the Preface to his “What Actually Happens“:

Sometimes it is better just to make a fresh start.
Just as a building may be so ramshackle that it can neither bear the weight it must nor be refurbished or enlarged effectively, so also may a social or intellectual structure be so deficient and self– defeating that any procedure which involved accepting it in general in order to correct some deficiencies in particular would be as hopeful and productive as slapping Uncle Remus’ Tar Baby around. In such circumstances one naturally tries to salvage what one can, but a fresh start is indicated.

Ossorio’s Person Concept is a fresh start. Below, you’ll find an outline of the elegant and satisfying elaboration of the Person Concept found in his The Behavior of Persons.

Ossorio thought it a good idea to approach ourselves scientifically as persons and not as something else. (We are not reducible to a machine, a wet computer, or an organism. Nor are we fundamentally irrational, unconscious, etc. Such embodiments and attributes may be, at times, what we also are).

The starting point is recognizing that people are deliberate actors who observe and describe themselves and their circumstances, critique how they are doing, and adjust their actions accordingly. In doing so people encounter and create their world. In we accept this as a starting point, the concepts Individual Person, Behavior, Language and World are the necessary interdependent concepts, each relying on each. None of these concepts can be adequately appreciated without full reference to the other three. All four together, Ossorio called the Person Concept.

A scientist, for example, is an individual who deliberately attempts to understand some aspect of the world using the social practices of their scientific community. This includes representing that understanding symbolically. For behavioral scientists, this might include attempting to systematically understand their own practices. The social and behavioral sciences (or alternatively, the systematic humanities) are fundamentally different from the physical or natural sciences in this way. Behavioral and social science must have a place for representing the practices of the scientists as empirical instances of the behavior of persons. The scientist is just another person within the boundaries of the subject matter.

The physical and natural sciences do not have this problem. For them, it is dirty pool to advance ad hominem critique, “that’s just the sort of physics we’d expect from someone like her.” But ad hominem arguments, if accomplished transparently and systematically, are, at times, appropriate in the behavioral and social sciences. Knowing something of the scientist’s life, personality, language, and world is often useful in understanding their perspective on the subject matters that catch their attention. We are interested in observer perspective and bias. But it’s more than this. Psychological theory has to have a place to account for itself. How could it be otherwise? Creating, critiquing, and empirically validating theory is an activity of persons (and only persons).

Unlike the physical sciences, the social and behavioral sciences must be both recursive, i.e., allow for systematic transition, stability and change, and reflexive, i.e., have a place to self-represent within the subject matter. The Person Concept accomplishes this. (The parametric formulation of Intentional Action is recursive since it can be repeated and linked to other actions performed by self and other, and has a built in place for the representation of both the person acting and the action performed.)

So with this promise made, let me show a bit of the Person Concept along with some hyperlinks connecting to content that further unpacks and uses these concepts. Part of what is promised is a pre-empirical foundation of explicit concepts and reminders consistent with the fact that in our actual lives we make choices, are held accountable, and can negotiate and understand others in our shared culture. That’s not all we do, but unless this ordinary manner of living has a place in behavioral science, such “science” results in caricature or distortion.

Here is a chart of the concepts and some of the key formulations, elements, and reminders that are components of the Person Concept. Calling these concepts “components” may be misleading. They are not in a part-whole relationship, but, as inter-dependent, offer different perspectives on the overall Person Concept. 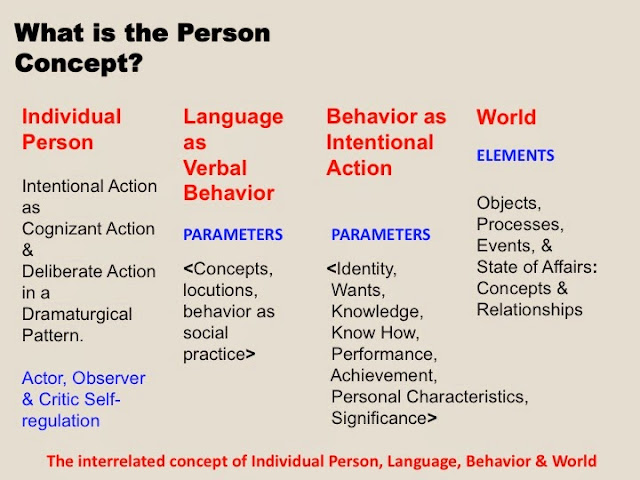 We’ll start with the Individual Person, which is a matter of choice, not necessity. We could have started with any of the other three concepts and ended up in the same place. This is not a logical-deductive system but something more akin to a map. 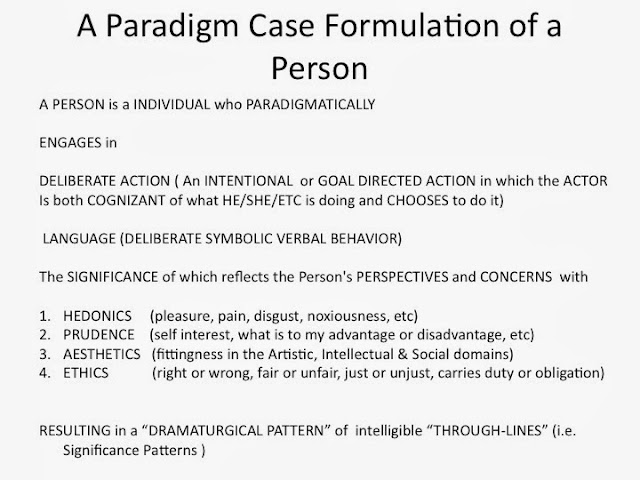 Cognizant and Deliberate Action are instances of the broader category of Intentional Action and will be described below.
Notice that this formulation allows for non-human persons as a possibility. I explore this in the posting, “What is a person and how can we be sure?”

What sort of object is a person? With the ascent of neuroscience, clarity regarding the relationship of persons, brain, neurology, and embodiment is called for. The neuropsychologist Ned Kirsch offers a clarification in “The Conceptual Relationship Between Embodiment and Persons”.

The “Individual Person” is able to engage in Cognizant and Deliberate Intentional Actions, briefly described below.

These parameters, < I, W, K, KH, P, A, S, PC >, provide a useful format for the comparative study of personality theory. Some theories focus more on some of these parameters than on the others. (For example, the operant conditioner will focus on the relation of Performance to Achievement; the psychoanalyst, to the parameters of Want, Knowledge, and Significance).

The parameters provide a common ground linking otherwise unconnected “silos of theory”. An adequate personality theory needs a differentiated way of accounting for all of these conceptual distinctions.

The Person Concept’s “Individual Person” is able to engage in Cognizant and Deliberate Intentional Actions. I illustrate this in the posting A Short Course in Descriptive Psychology. 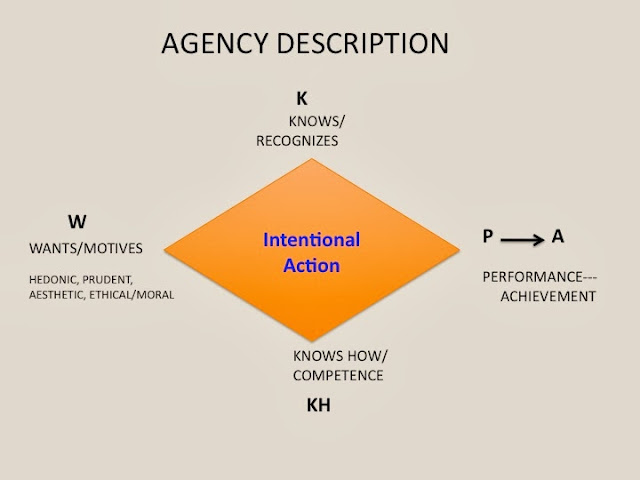 A chain of these descriptions linking behaviors both individual and interpersonal creates recursive Social Practice Descriptions. 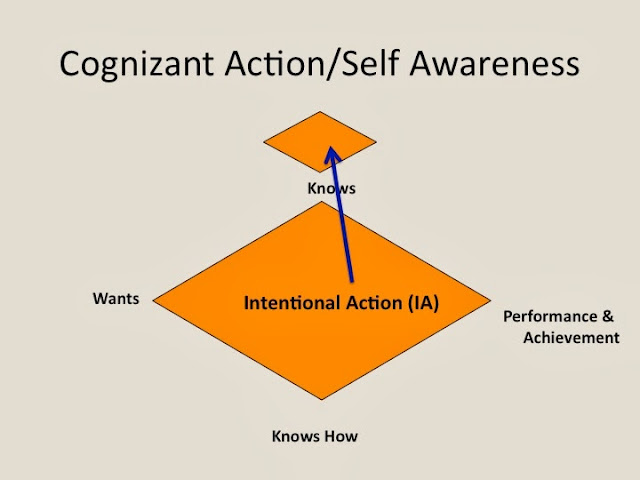 In Cognizant Action, the actor knows something of the Intentional Action performed and this allows for reflexive representation. 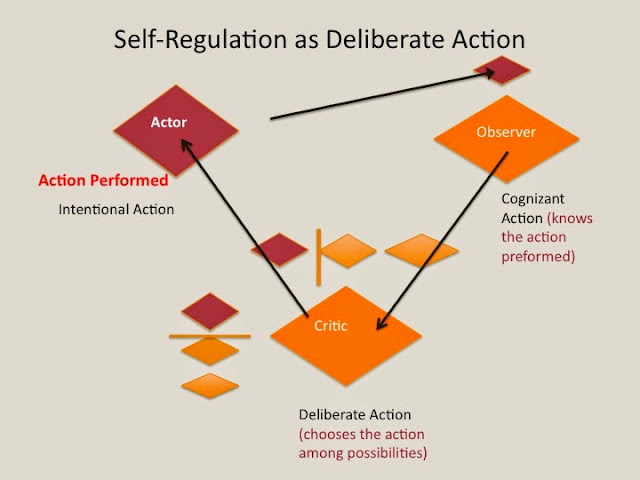 Since a person is both a cognizant observer and deliberate critic of their ongoing action, self-regulation by means of a classic negative feedback loop occurs.

I explore these concepts further in the posting Intentional Action, Empathy, and Psychotherapy.

Ray Bergner’s “What is behavior? And so What?” cogently argues that psychology has been crippled by the lack of an intelligible and consensually recognized agreement on the meaning of “behavior” and presents Intentional Action as a solution to this problem.

Behavior follows from the recognition of something wanted that one knows how to get. The multiplicity of motives requires judgment and follows from the weights a person actually gives their motivational values. This produces choice, conflict, and the fact of individual differences. Some of this is expressed in Ossorio’s Relationship Formula: 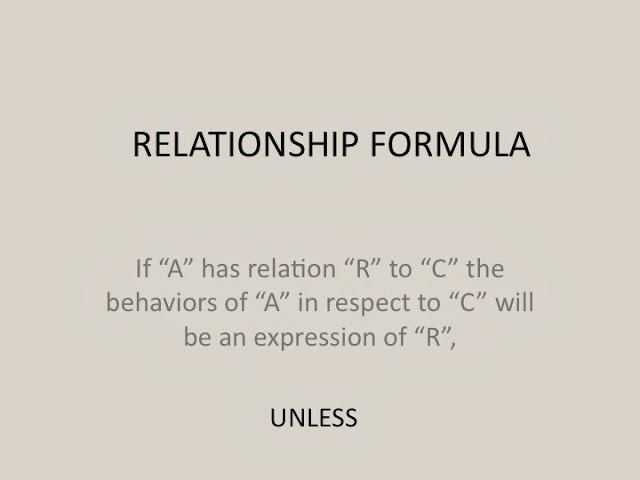 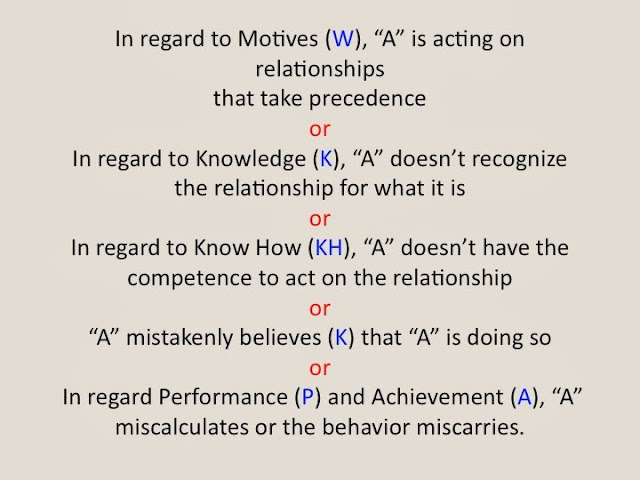 
Language provides the Person with a way to represent, communicate and negotiate options. To be able to represent actionable distinctions is vital in Deliberate Action and the social practices that make up a person’s life and community. These distinctions will also be the Individual Person’s World.

The formula explicitly ties the meaning of language to its use. Concepts are distinctions that have informational value. They represent distinctions that make a difference in behavior. Concepts are operating tools for our varied and irregular actions. They vary the way that tools in a tool chest vary. They are created and employed to do different things: To correspond in one way or another to all the things we do. Locutions or utterances are expressed in speech or other symbolic form and correspond to or represent the concepts. The Behavior is the Social Practice where the uttered concept is employed and validated through shared social use. This is similar to Wittgenstein’s point that language is not private, that the meaning of a concept follows from it’s use in what he called language-games. And remember, we have all sorts of games played in all sorts of different and irregular ways. We need a vast array of concepts along with a complicated grammar to get at the objects, processes, events, and state of affairs that constitute our World or Reality.

I employ this understanding of language in the posting, Language, Influence, and self-presentation: Lessons for the young therapist.

Inherent in the concept of language are the social practices that provide the meaning and the significance of communication. This naturally implies what some have argued is the fifth major component of the Person Concept, community. Anthony Putman’s “Communities” is a seminal explication of this concept.


The computer scientist, Joel Jeffrey, in his essay, Structure, demonstrates a use of the State of Affairs System in a “calculation of the structural similarity of disparate kinds of things in the world, ranging from human families to intra-cellular organelles”.


What I have presented hardly does justice to the elegance and elaboration of Ossorio’s creation, nor have I mentioned the related methodologies that follow from this perspective.

The Person Concept was originally published @ Lessons in Psychology: Freedom, Liberation, and Reaction and has been syndicated with permission.