Missing the Boat with Donald Sterling and Athletes…21st Century Solutions

Here is how a social worker would work with the Donald Sterlings or other offending athletes. I am addressing negative behaviors of the athletic community, but the same can be said of any community (celebrities, corporations, or CEO’s). Financial consequences and short bans from playing usually accompany misbehavior. Are these consequences effective? Social workers know they are not.

Consequences are given by direct authorities of the athletic community or by our judicial system. These consequences usually center on fines and suspensions. Suspensions can be anywhere from one game to a lifetime suspension, but lifetime suspensions are rare. The NBA donates their fines to charities, but let’s be specific. How about when these offenders receive fines; they are required to pay a charity(s) directly associated with their offense? The NBA is the first to start this with Sterling’s fines going toward promoting anti-discrimination and tolerance. The NFL chooses only four charities (the Lombardi Cancer Research Center, Brian Piccolo Cancer Fund, ALS Neuromuscular Research Foundation, and the Player’s Association Assistance Trust Fund), none related to actual violence, which is usually the reason of the offense. Why are the fines not given to evidence based programs for violence prevention or intervention? 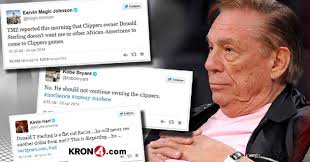 Who has the power in these situations and what can they do about negative behavior?
1. Judicial System Judges have discretion in their sentencing. Advocate for sentencing befitting of the act. Get creative with sentencing.Develop sentencing guidelines with advocacy groups of the associated issue. There is a 35%conviction rate of athletes accused of sexual assault compared with 77% of the general public according to the Los Angeles Times writer Maryann Hudson. If Judges could give alternative, meaningful, sentencing this might be higher.
2. Sports Commissioners (i.e. NBA’s Adam Silver, NFL’s Roger Goodell, etc.) can tie in behavior clauses into contracts. Commissioners need to meet as a group and make decisions about what clauses will be consistent with every contract. No negotiation with violence clauses.They should be a part of every contract. The commissioners can develop a website to include fans as to the distribution of fines athletes receive. If the issue is violence, organizations can post their evidence based programs and fans can vote. Make the organizations part of the solution.
3. Sponsors – There are some sponsors who drop athletes from their endorsement deals, but what about those they keep? Riders in contracts about negative behavior can allow endorsement deals to be void when athletes break the law. Sponsors can use the media attention to support their product because they reinforce values and ethics towards non-violence. The sponsor can give the remaining contract of the athlete to the corresponding charities and publicize their work. Or include the public by changing the profit of a footwear product of the athlete’s to go to charity. Write this behavior clause in every contract.
4. Other Athletes – Positive and negative peer pressure. Turning jerseys inside out is great team solidarity.What about in the locker room? Taking other athletes aside to discuss how they handle stress, encourage counseling, or exert social pressure about what is not acceptable behavior for a person, can be effective ways of addressing the situation. The most important thing is back up your words with behavior.
5. Fans– Fans are powerful. Organized bans of fanfare buying, writing letters to sponsors saying you will not buy X until action is taken, or organizing campaigns on social media addressing unacceptable behavior can make a difference. Money and perception tied together is an avenue to create change. Make your voice heard through social media outlets for alternative sentencing and sanctions impacting these athletes and their owners. Send shout outs on Facebook, make memes on Tumblr or tweet (#nomorekobejerseys) when you choose NOT to buy something because of negative behavior.
When Women Athletes Attack
There are many less women who are in sports committing violent acts, but there are a few. When a female athlete commits a crime what happens to her? Tonya Harding committed a crime of clubbing Nancy Kerrigan’s knee. What was her consequence? She was banned for life from competing in the United States. Have you heard of any consequence this severe in football, hockey, or basketball? No. Extended prison sentences are the only thing holding back professional male athletes.
Solutions
Below is a chart encouraging alternate sentencing for athletes. This excludes sentencing guidelines for assaults, sexual assaults, DUI manslaughter, and other behaviors punishable by prison time.
Technology adds to constructive alternatives to consequences and tracking of positive behaviors. All volunteer work can be tracked by GPS and taking photos on Snapchat, then sending them to a caseworker, athletic organization, or parole officer. This prevents people from hiring other people to go for them. Many other ways of If you have any additions, please place them in the comments section or suggest them on websites of owners, athletic organizations, or sponsor pages. Everyone can be proactive on any level. If we all acted on one of these, violence would be addressed through proactive means in sports. #athletesaccountable

Missing the Boat with Donald Sterling and Athletes…21st Century Solutions was originally published @ Bridging the Digital Divide in Social Work Practice and has been syndicated with permission.