Time and again: This time, Orlando 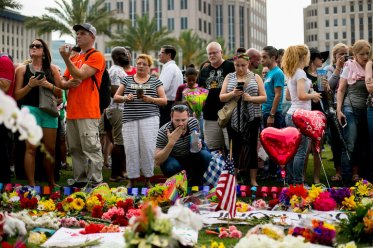 For those of us who know that childhood adversity can lead to chronic disease, mental illness, and violence, among other consequences, the questions about Omar Mateen, the man who killed 49 people and wounded 53 others in an Orlando night club early Sunday morning, aren’t answered yet. In fact, most of the questions that would address the roots of his violent actions — and our successful efforts to prevent other mass shootings — haven’t even been asked.

There are a couple of hints. According to this New York Times article, “Mr. Mateen had a chilling history that included talking about killing people, beating his former wife and voicing hatred of minorities, gays and Jews…”

He either had a brain tumor/stroke/dementia/physical injury that induced him to violence, which is unlikely because it’s so rare, or he had many adverse childhood experiences (ACEs) that he never resolved. If it’s the latter, which is much more likely, as I’ll explain later, then there are questions pertinent to understanding the trajectory of Mateen’s tragic life from the time he emerged from his mother’s womb as, hopefully, a wanted and loved infant, to certain suicide dying in a hail of bullets after killing so many. These questions are much more pertinent than asking if he was “self-radicalized”.

Mateen was born in the United States, and brought up in a family that had immigrated from Afghanistan, which isn’t an easy transition for most families, and can affect their lives for decades. Was life so unsafe in Afghanistan that his parents endured extreme hardship and had to leave? Were they involved in any of the country’s wars? His father appeared in videos where he railed against the Afghan government and Pakistanis; was that anger directed against his son verbally or physically?

Was he bullied by classmates or teachers when he was a child for being an immigrant or for his religion?

Did he witness abuse against his mother or some other family member? Was a family member depressed or have some other mental illness? Was a family member imprisoned or killed (either in Afghanistan or the U.S.)? Did he experience sexual abuse, or was he emotionally or physically neglected? If he was sexually abused as a boy, was he so ashamed of that experience that he thought he might be a homosexual, and was he so deeply afraid of being such that it turned into abject hatred for homosexuals as well as for himself? Were his reported many visits to Pulse, the nightclub where he killed or wounded nearly a third of the patrons, because he was a homosexual, and, if so, did his resulting inner conflict with his family and religion lead to his unmanageable rage?

Why these questions? They come out of the science around adverse childhood experiences. Specifically, the CDC-Kaiser Permanente Adverse Childhood Experiences Study (ACE Study), which focused on 10 types of childhood trauma — physical, sexual and verbal abuse; physical and emotional neglect. And five types of family dysfunction — a family member who’s an alcoholic or addicted to some other substance, a family member who’s depressed or has some other mental illness, a family member who’s incarcerated, witnessing a mother being abused, and losing a family member to divorce or separation. Subsequent ACE surveys have included bullying, racism, witnessing a sibling being abused, living in a war zone, and even systems abuse, such as being involved with the foster care system, or living in an unsafe community.

The ACE Study — as well as several dozen ACE surveys in U.S. states, cities and organizations — show that ACEs are extraordinarily common — two-thirds of us have experienced at least one of these types of trauma; 12% of us have experienced four.  The more types of adversity a child experiences, the more severe the consequences. For example, compared to someone who has an ACE score of zero (none of the 10 types of childhood adversity in the ACE Study), a person with an ACE score of 4 (e.g., physical and verbal abuse, bullying and witnessing a mother being abused) is 12 times more likely to attempt suicide, seven times more likely to become an alcoholic, and twice as likely to have heart disease or cancer. Compared to a man who has an ACE score of zero, a man who experienced physical abuse, sexual abuse and witnessed his mother being abused is nearly four  times more likely to physically abuse his wife.

The ACE Study is the epidemiology part of ACEs science, sometimes called the “unified science of human development”. The other parts are the neurobiology of toxic stress — how toxic stress from ACEs damages a child’s brain. When a child suffers extreme and chronic stress, the outward behavior looks like fighting, fleeing or freezing (fright), while the brain’s function and structure is harmed by too many stress hormones. Toxic stress also produces long-term wear and tear on our bodies (biomedical consequences), and it’s passed from one generation to the next (epigenetic consequences). Resilience research shows our brains are plastic and our bodies want to heal.

The ACEs questions are the same questions that should have been asked of the lives of Boston bombers Tamerlan and Szhokar Tsarnaev, whom Mateen called out during his last day of rage. As I wrote in that article, “Looking at the Boston Marathon bombers through a trauma-informed lens is not the same as investigating how they committed their crime, or identifying an immediate motive. Instead of attributing the starting point to being “radicalized” or “self-radicalized”, a trauma-informed lens reveals what a family experienced, and what a community did or did not do for a family and its members on their journey to the point where they decided to use violence.”

Focusing so much on Mateen’s possible links to terrorism (direct, or being inspired by it) — a focus made noisier and more frantic by the media as well as some politicians — creates a fog of fear that keeps us stuck in a place of continuing to chase the monsters of our own creation, rather than using our new understanding of human development to make sure we no longer create them. And that means making sure that children have the support they need, and that our systems — education, healthcare, social services, juvenile justice, etc. — do indeed support them instead of traumatize them and their families.

There was one mass shooting where terrorism didn’t cloud the inquiry, and all of these ACEs questions were asked. After Adam Lanza took the lives of 20 six- and seven-year-old children, six of their teachers, his mother and then himself, the Connecticut community took a deep look at his life. It didn’t just look at Lanza and his family; the community also asked, “Where could we have intervened earlier to change the trajectory of this boy’s life?” The community determined that earlier intervention and more support for the family might have changed his life course. It pointed out:

Although the report does not draw a line between the events in Adam Lanza’s young life and the massacre, it points out repeated examples in which the profound anxiety and rage simmering inside Lanza was not explored in favor of attempts to manage his symptoms.

If you think of the experiences that fill a child with so much anger that it spills out into recognizable and normal reactions to toxic stress, at what point could Mateen’s stress behaviors have been recognized by a teacher, a coach, a neighbor, another family member? The imam of the mosque he attended noticed that, as Mateen grew up, he became reclusive. That can be an indication of a troubled soul. Was there any intervention by a caring adult?

Without intervention of understanding, nurturing and healing, a highly stressed child can grow into an adult who turns anger inward, with resulting autoimmune diseases, or into an adult with a seething, roiling anger that occasionally bubbles over into domestic violence or violent rants. By the time that anger is ready to explode into uncontrollable rage, any hook that’s handy will do to justify taking out that anger on one or on many. For some, such as Dylann Roof, who killed nine people in the Emanuel African Methodist Episcopal Church in Charleston, SC, it was white supremacy and racism. For Tamerlan Tsarnaev, it was religious extremism. For Mateen, it was a vague, apparently not well thought out, nearly spur-of-the-moment allegiance to ISIS. It doesn’t matter what the hook is, as long as it hides — and serves as a release of rage or frustration from — the overwhelming pain that has occurred from too much abuse, from too many sources, over too much time. And, unfortunately, an automatic weapon is an attractive vehicle for releasing that anger, because it’s so easy to obtain and does so much more damage than a knife.

What we can learn from answering these ACEs questions — and how a community did or did not respond to a troubled family — can underscore the necessity of the work that’s being pioneered by educators, judges, community advocates, social service agencies, politicians, pediatricians, the faith-based and business communities.

So far, there are enough people in all of these sectors who are implementing trauma-informed and resilience-building practices based on ACEs science to show that this new approach of understanding, nurturing and healing works a lot better than blame, shame and punishment. They are showing that, at the first sign of troubles in families, if we intervene early and offer assistance, children and families can move from lives dominated by trauma to lives filled with happiness and health.

And happiness and health is what immunizes children best against white supremacists, or religious cults or any other form of extremism.

Time and again: This time, Orlando was originally published @ Jane Ellen Stevens – ACEs Too High and has been syndicated with permission.