A Short Course in Descriptive Psychology

Descriptive Psychology is the intellectual discipline devoted to connecting and making explicit the implicit structure of the behavioral sciences. As such, it concerns concepts rather than theories, is pre-empirical, and aims at identifying the full range of what constitutes a subject matter. By pre-empirical I mean the job of Descriptive Psychology is to clarify and organize the possibilities of a subject matter without a prior commitment to what those possibilities turn out to be. For that, we have to go out and look.

Once a conceptualization of a subject matter is in hand, theory might then be useful as a way of explaining and perhaps predicting the specific empirical patterns that are found to be the case. But that is not the job of Descriptive Psychology. (For that job, I might wear my psychoanalytic hat).

Descriptive Psychology attempts to explicate the Person Concept as the fundamental structure of the behavioral sciences. The Person Concept involves the interrelated concepts of Individual Person, Behavior, Language, and World. Only Individual Person and Behavior will be addressed in this entry and only in a very basic manner. Most of the diagrams are followed by a link that will further elaborate the content.

The diagrams that follow are some of the ones I use in my classes on psychoanalytic theory and practice as taught from the perspective of Descriptive Psychology.


We start with the concept of a person: 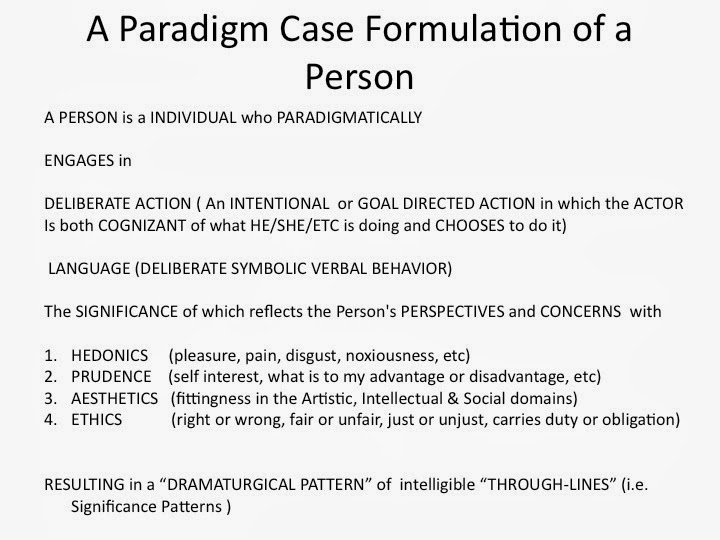 I explore this is greater detail in the essay What is a Person? And how can we be sure?
And then examine behavior through the concept of Intentional Action by way of the Agency Diamond: 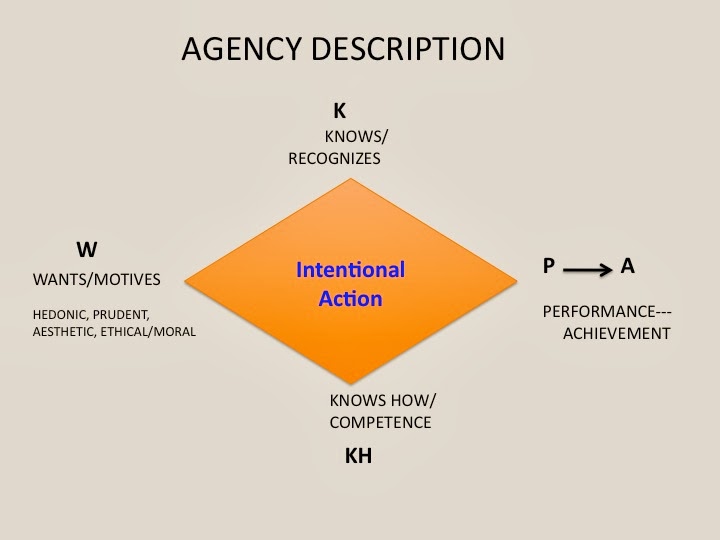 This represents five of the eight parameters of the full case of Intentional Action which has the conceptually separable dimensions of Identity, Wants, Knows, Knows How, Performance, Achievement, Significance, and Personal Characteristic.
Agency descriptions concern behavior that is goal directed or purposeful. These descriptions are defined by something recognized and wanted that the person knows how to do. It also involves a performance in real time that achieves some difference in the the person’s world.
This is explored further in the blog entry, Intentional Action, Empathy and Psychotherapy.
We then go on to represent Cognizant or Self-Aware Action: 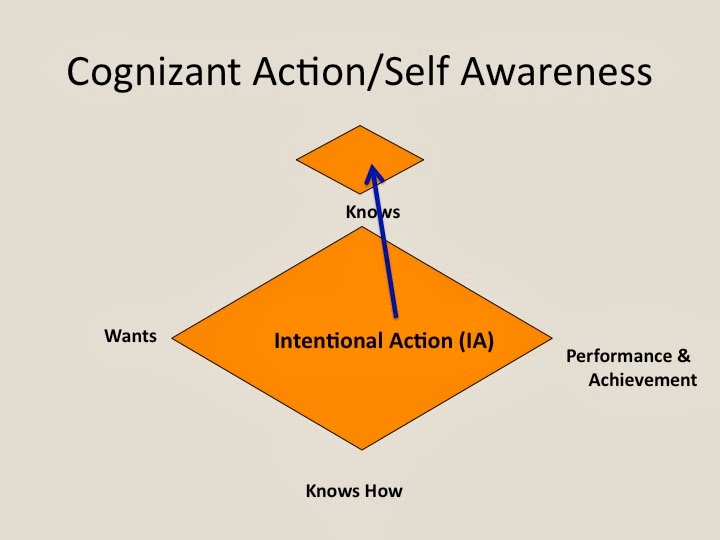 In Cognizant Action the person knows they are engaged in an intentional action of some sort and this is represented by the small diamond above the Knows parameter.
Then we are ready to look at a special case of Intentional Action that we will call Deliberate Action in which the person chooses an action from alternative ways of reaching a goal given how they observe or recognize their circumstances. This will be the paradigm case of the behavior or persons. 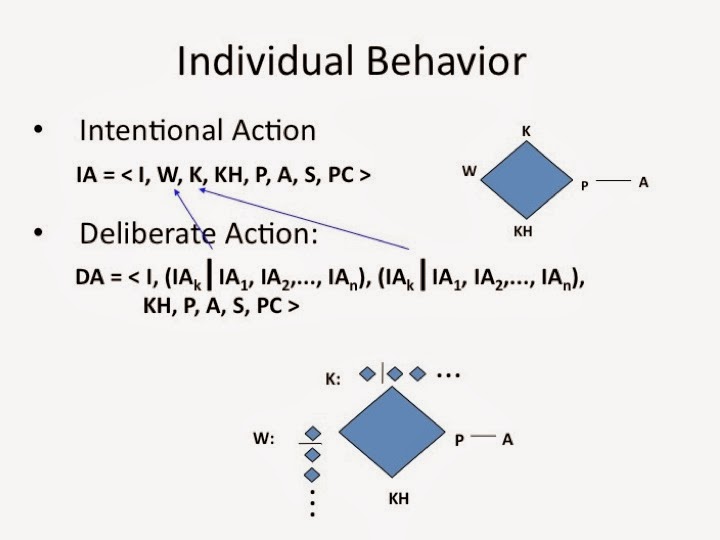 IA=Intentional Action; I=Identity; W=Wants; K=Knows; KH=Knows How; P=Performance; A=Achievement; S=Significance; PC=Personal Characteristic. Adapted with permission from Joe Jeffrey,Ph.D
The blue diamond notations are a shorthand that represent an Intentional Action Option without commitment to the Identity of the actor, the Significance of the act, and the Personal Characteristics that the act reflects. The little blue diamonds represent the intentional action options that reflect what the person wants and knows given the circumstances.
In a Deliberate Action, the actor is both Cognizant of what he is doing (IA in K) and Chooses to do it.
Another way of going about this is to remember that persons as Deliberate Actors are able to self-regulate or adjust their behavior to fit the changing circumstances and their recognition of how effective they are in achieving their goals. For this we employ the Actor-Observer-Critic feedback loop of self-regulation: 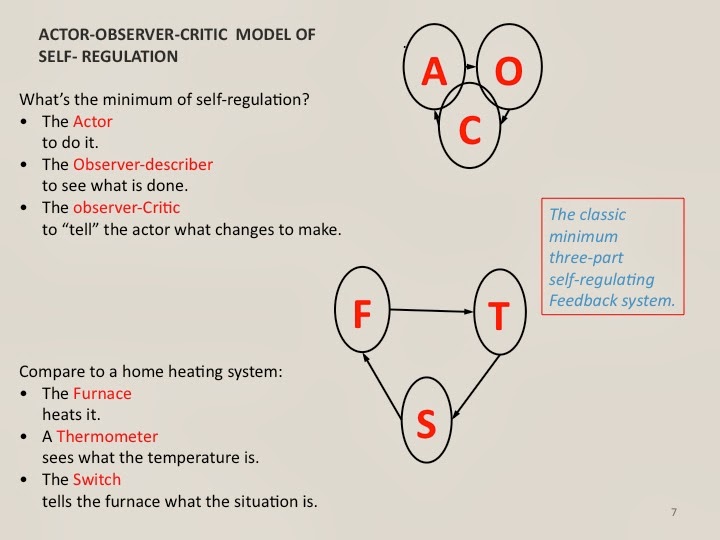 Adapted with permission from C.J. Stone’s “Actor Central”.
Keep in mind, that although this feedback could be a process of deliberation, of thinking through the possibilities, it ordinarily isn’t. Instead, for the most part, people simply recognize or know their options and what they take to be the “best” course to follow. Many problems in psychopathology involve something going wrong in this feedback loop.
The A-O-C model naturally relates to the concepts of Intentional, Cognizant and Deliberate Action: 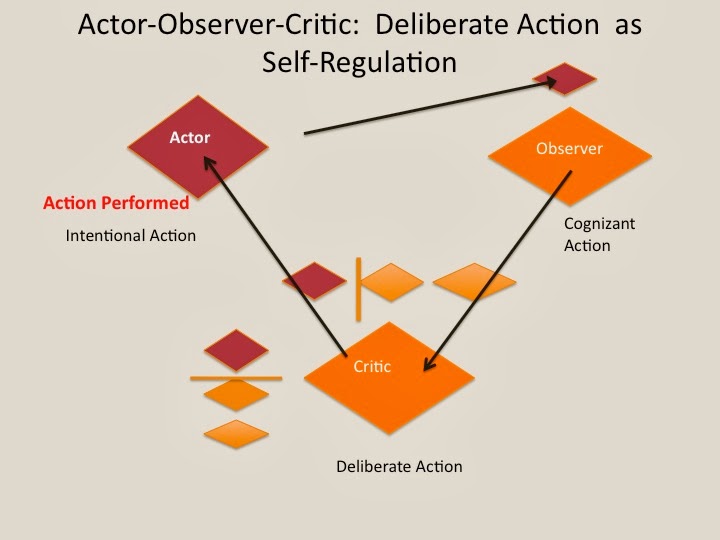 At this point it is useful to look at Deliberate Action as a Judgment or Appraisal and for this we use the Judgment Diagram: 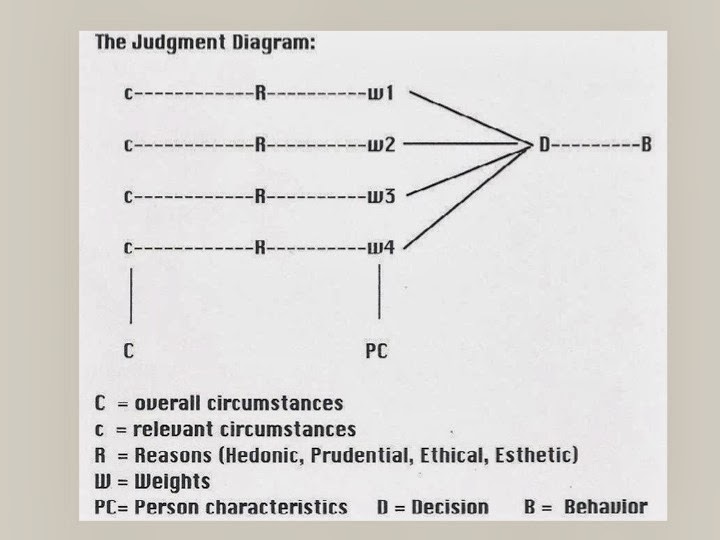 This is a reconstruction, performed after an action, given an agent’s Personal Characteristics, of how they weighed their hedonic, prudent, aesthetic, and ethical/moral values in their Judgment or Decision on what Behavior to enact. Although Judgment or Decision could be an active process of thinking through the options, of deliberating about the circumstances, it usually isn’t. The person simply knows what they want to do. On the other hand, if the behavior goes wrong, a person might rethink their judgment by reconstructing their action in a way that the diagram illustrates. Later, we will use this diagram to help understand unconscious motivation, transference, and symptomatic or compromised behaviors.
But first I’d like to show how the Intentional Action model can provide insight about Empathy: 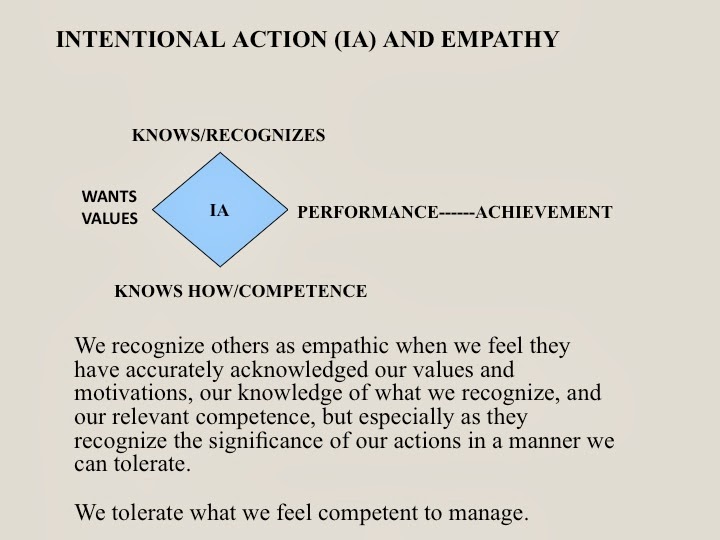 We can use this model to look in more detail at the more or less quality of an empathic understanding as well as the kindred concept of metallization, a concept I find far less problematic than the notions regarding “theory of mind”. Wil does not have a theory that Gil is a deliberate actor with a mind of his own. He simply takes it to be the case unless he has reason not to. Wil’s becoming a person required engaging with others as deliberate actors. He did not first need a theory or assumption to see others as like himself in this way. However, if in some autistic manner he did not adequately know others to be minded, this model might be a way to teach him by showing the factors involved. 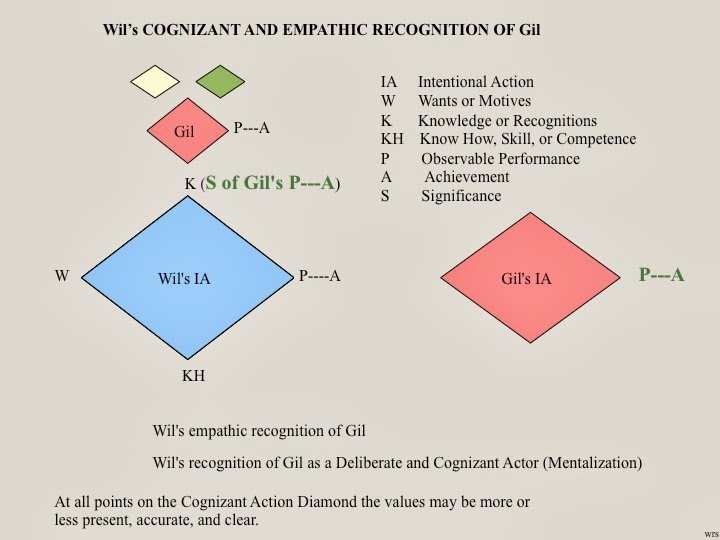 This is elaborated in the essay, “The Parameters of Empathy.”
Keep in mind that Will does not have direct access to Gil’s Wants, Knowledge, or Know How, but can only observe and think about the Significance of Gil’s Performance and Achievement. The yellow and green IA diamonds above Wil’s representation of Gil’s behavior show that Wil more or less empathically recognizes that Gil has his own choices and is also a Deliberate Actor, i.e., a person like himself. This is how I understand “mentalization”.
Earlier, I probably should have introduced a very important conceptual tool, The Relationship Formula, since this is derivative of the concept of Intentional Action and will be a key to understanding both emotional behavior and behavior that doesn’t follow the expected norm, along with a host of other important questions we often ask when behavior don’t go as expected (and even when it does). As you will see, we are very fond of unless clauses in Descriptive Psychology. 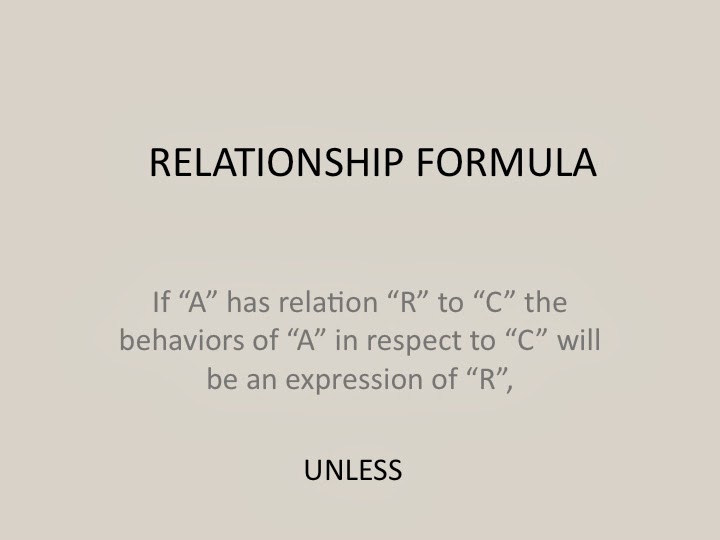 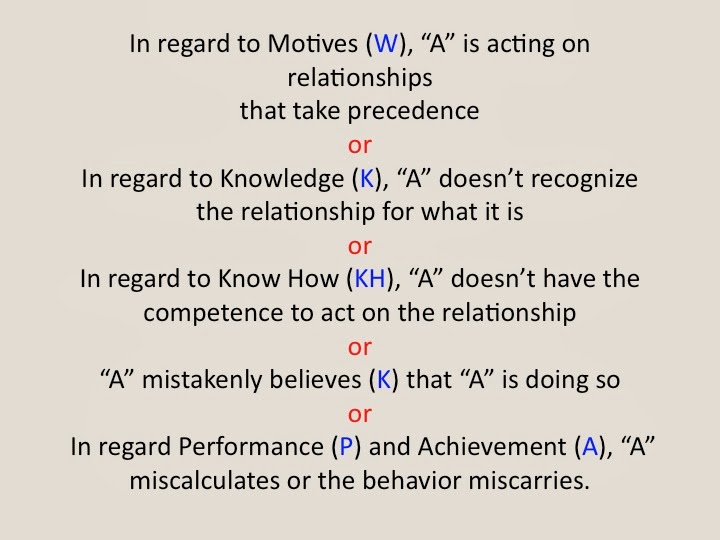 Should you be interested, I make use of this formula in my essay, Sex and a Person’s True Colors.
A lot to digest. But if you’re ready, I’d like to pull some of this together by way of clarifying some aspects of unconscious action. Since I am a psychoanalyst, this seems obligatory. Let’s start with the logically necessary reminder that the unconscious is an Observer’s construct. The unconscious refers to what I think I notice about you, that you can’t recognize about yourself. Also keep in mind that since no one has a pipeline to the truth, we are entering a domain of disagreement, contention, and defensiveness. I liken this to the lawyer’s dilemma when facing opposing counsel, jury and judge. It boils down to making a case that regardless of its merits will be accepted or rejected. 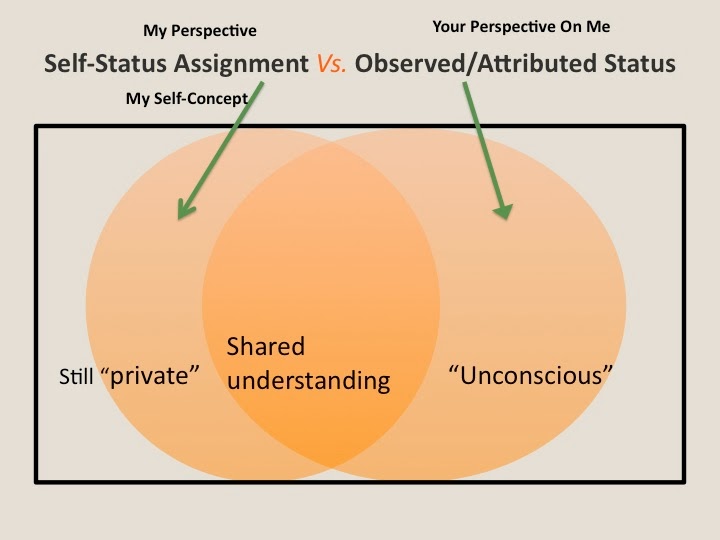 The issues of interpretation are explored in the earlier post On the interpretation of unconscious action and self-deception.
And now, finally, I going to reposition some of this using a variant of the Judgment diagram that was introduced earlier. Here are some fundamental distinctions that involve the concept of unconscious action and recognition (transference) as well as motives that a person might refuse to acknowledge as their own (although if given sufficient reason, they might.) 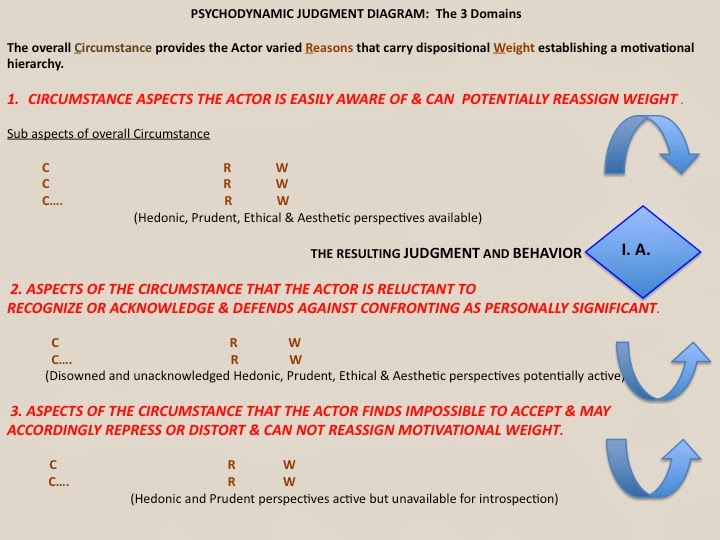 This is further elaborated in Bad Faith, Self-deception and Unconscious Motivation.
Notice how domains two and three are likely sources of disagreement and are also sources of behavior going wrong, being compromised, or mysterious to the Actor. That which is unconscious and unexamined is difficult to socialize and hardly available for moral dialog and negotiation. It’s where we mess up.
At this point, I think I’ll call it a day.

A Short Course in Descriptive Psychology was originally published @ Freedom, Liberation and Reaction: Lessons in Psychology and has been syndicated with permission.