Empathy and the Problem of Definition

Wynn Schwartz Ph.D February 11, 2014
Wynn Schwartz Ph.D
In the behavioral sciences it is often very difficult to know if we are on the same page. This confusion plagues many of our discussions. How do we define our terms? How do we manage useful disagreement? Are we even talking about the same thing? These issues surfaced immediately at The Helix Center’s roundtable on empathy and altruism. We have varied and different commitments when we use these concepts.

A video stream of the conversation can be found here:
Empathy and Altruism

So what can be done? In Descriptive Psychology, Paradigm Case Formulation and Parametric Analysis are the tools used when ordinary definitions prove either too exclusive or inclusive or lead to unmanageable disagreement. I think the Paradigm-Case Method in legal work serves a similar function.

I am going to try to sort some of this out regarding empathy but that will also require an excursion into intentionality and intentional action. I can’t directly see through your eyes, but I can see what you do.

Paradigm Case Formulations are employed when it is desirable to achieve a common understanding of a subject matter but where definitions prove too limiting, various, ambiguous or impossible. I think empathy poses this definitional problem. Finding an inclusive definition is a common conceptual dilemma. Consider how difficult it is to exactly define what is meant by the word “family” or the word “chair” if we wish to achieve agreement on all examples of possible “families” and “chairs”. Must all families have two parents of different genders plus their children? Must all chairs have four legs and a backrest? A Paradigm Case Formulation should provide all competent users a conceptualization that can serve as a starting point of agreement. Generally it should consist of the most complex case, an indubitable case, or a primary or archetypal case. It should be a sort of “By God, if there were ever a case of “X”, then that’s it.” For example, most would agree that a group of people living together, consisting of a married father and mother, and their biological son and daughter would be a family. But what if there is only a husband, his husband, and their dog? Or, three best friends who live under one roof and make their significant decisions together? What elements must be present and what can we change, add or leave out and still meet what different people would call a family?

By starting with a paradigm case that everyone easily identifies as within their understanding of a concept, it becomes possible to delete or change features of the paradigm with the consequence that with each change some people may no longer agree that they are still talking about the same thing. But because of the shared paradigm, they can show where there is disagreement.
A Parametric Analysis, on the other hand, attempts to clarify how one example of the subject matter can be the same or different from all other examples. Each parameter should identify a necessary and independent dimension of the concept. For example, all figures in plane geometry are the same or different depending on their varied location on the parameters of the ordinate and the abscissa. All colors are the same or different depending on how they vary on the parameters of hue, saturation and brightness.
What about empathy? Empathy is variously understood to involve an appreciation of being in another person’s position, an appreciation that is both accurate and attuned to the other’s current predicament and state of awareness, a sort of “feeling into” the other, a knowing of their perspective. Empathy is often connected to an altruistic or sympathetic stance and is a feature of the “I-Thou” relationship. It tends to be respectful and kind.
But seeing from another’s perspective is a useful reminder and a fiction. I can only walk in my shoes and see from my perspective. What I have available are my observations and thoughts regarding my interactions with other people. I
observe other people’s actions but I do so from where I stand. There is no way around this fact. Since we cannot get inside another’s head, our sense that the other is being empathic will follow, correctly or not, from whether we experience the other as understanding the significance of our activity.
As a psychotherapist and supervisor of psychotherapy, I believe that empathy is a defining feature of effective treatment. In my training, the three most influential theorists of empathy were probably Carl Rogers, Heinz Kohut, and Roy Schafer. These authors offer a similar vision of the therapist’s empathic activity, and of the effect empathy has on the client. Schafer will further describe empathy as both a psychological state and as an action, a position I find particularly useful in building a tool for empathic inquiry. All three authors will provide a starting point for my conceptualization.
Carl Rogers makes the following points about empathy. It involves “entering the private perceptual world of the other”, “being sensitive, moment to moment, to the changing felt meaning which flow in this other person”, assuming a nonjudgmental stance, and being careful not to uncover meaning that the other would find threatening.
Heinz Kohut describes empathy as “the capacity to think and feel oneself into the life of the another person” and as “vicarious introspection”. Kohut also underscores that appropriate and therapeutic empathy is “attenuated empathy”, a diminished response that is not overwhelming to either party and protects both from becoming too defensive or “walled off”.
Roy Schafer describes empathy as sharing and comprehending the momentary psychological state of another person. For Schafer, empathy is a central feature of the analyst’s attitude from which the analyst constructs a mental model of the analysand, and expresses this understanding with care not to “mortify” the client. All three authors represent empathy as an understanding that is accurate, attuned to the present interaction, and tolerable to both people.
A Paradigm Case Formulation of Empathic Action
My formulation: 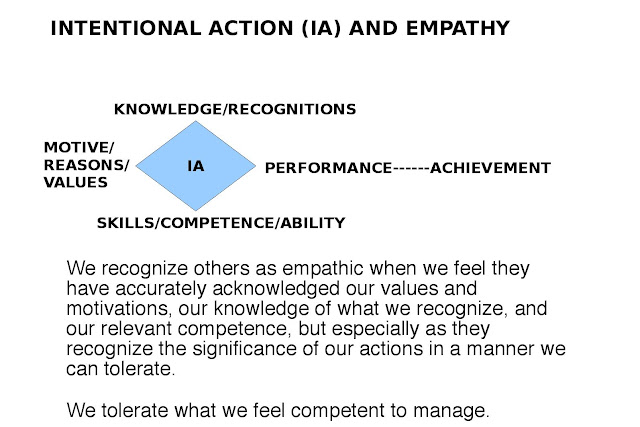 Empathic action communicates an accurate understanding of the significance of another person’s intentional actions in a way they can tolerate being recognized. This requires understanding a person’s currently active motivations, knowledge, and skills and how they view the significance of their actions in the current circumstance. As a Paradigm Case Formulation, I take it that what I have described is recognizable as empathy and that the formulation allows for alterations that will become more or less recognizable within the ordinary shared meaning of the concept. For example, although I have described this as a two-person interaction, the number of participants can be increased. The accuracy of the understanding can be shared by all or just assumed by one party (“I’m being empathic even if you don’t realize it.”).
Motivation, knowledge, skill and significance are parameters of a person’s understanding of intentional behavior. The content of these parameters can be more or less accurate and certain and this is why empathy has a “more or less” quality. Some people we clearly understand and some people we just sort of understand.
Since the content of each of the parameters may be more or less deficient and may change over time, a person may judge that someone is not or no longer empathic, and this may lead to disagreement, but the parameters of the formulation should allow observers to know where they agree and where they differ.
My goal is to be systematic about the dimensions or parameters of empathy and to develop a set of questions and reminders that can be used in an interview or in self-reflection.
The parametric analysis of intentional action developed by Peter Ossorio provides the dimensions for my conceptualization of empathy. Ossorio presents intentional action as the most inclusive concept of behavior that includes the behavior of humans and other animals. The general case of intentional action allows for various forms of deliberate and non-deliberate intentional action as well as intentional action performed consciously, pre-consciously, or unconsciously. In deliberate action, the actor attempts to choose among options relevant to reaching a goal, whereas in non-deliberate intentional action only the recognition of a goal matters independent of whether the actor sees alternative ways of reaching the goal. Impulsive emotional action may be merely intentional, whereas the recognition of choice and alternative typify deliberate action. The guiding notion is that intentional activity involves a purposeful and meaningful attempt to accomplish something. This is in contrast to apparent behaviors that are accidents, matters of reflex, or completely forced or coerced. For the most part, when speaking about the behavior of persons, we mean some form of intentional action, even though the paradigm case of the behavior of persons will be deliberate action. Persons are sometimes but not always deliberate actors. But the eligibility to be a deliberate actor is a fundamental aspect of the full concept of “Person”.
Here’s a parametric analysis of behavior that identifies the dimensions one behavior can be the same or different from another behavior.

I: The Identity of the actor.
W: What the actor Wants to accomplish.
K: What the actor Knows, distinguishes, or recognizes in the circumstance that are relevant to what the actor Wants. (In Deliberate Action the actor recognizes different options, in Cognizant Action the actor is self aware of the ongoing behavior).
KH: What the actor Knows-How to do given what the actor Wants and Knows about the relevant circumstance.
P: The procedural manner or Performance of the action in real time.
A: The Achievement of the action.
S: The Significance of the action for the actor.
PC: The Personal Characteristics of the actor expressed by the action.
These parameters roughly correspond to the content of Schafer’s “mental model” and are implicit in people’s basic understanding of each other. We implicitly understand each other as having specific motives, knowledge, and skills. We also see people’s behavior as a manifestation of their particular personal characteristics, and we expect that people can appraise the significance of their actions and the actions of others.
To the extent that these parameters cover the full range of purposeful behavior, they should also cover the distinctions relevant to empathy. The parameters can also serve as a guide or checklist when I am uncertain about my empathy toward another person. I find the following questions to be useful reminders. I might ask or wonder:
1. Given their understanding of the overall circumstances, what does this person want and value? (And do we share an understanding of what the overall circumstance call for? ) (The “W” parameter)
2. What exactly do they recognize in their circumstance that is relevant to what they want and value? (And do we share a common appreciation of this situation?) (The “K” parameter)
3. What do they know how to do given what they see as their current opportunity or dilemma? (And do they have the skill or competence that is needed to successfully manage the circumstance?) (The “KH” parameter)
4. What is the significance to them of how they behave in this circumstance? (The “S” parameter)
5. What personal characteristics are they employing and what is the significance of these characteristics to them? (The “PC” and “S” parameters)
6. I should also wonder how they will appreciate and tolerate my understanding.

Adapted from my “The Parameters of Empathy: Core Considerations for Psychotherapy and Supervision”, The Advances in Descriptive Psychology, Vol. 10, in press.

This entry is again taken up in Intentional Action, Empathy and Psychotherapy.

Empathy and the Problem of Definition was originally published @ Freedom, Liberation and Reaction: Lessons in Psychology and has been syndicated with permission.